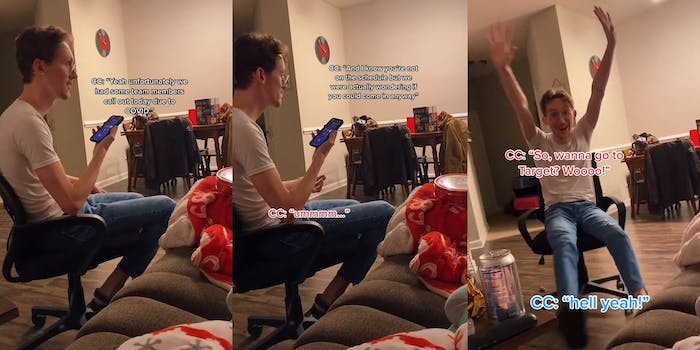 ‘Normalize ‘No’ and hanging up’: Worker abruptly shuts down manager who tried to ‘guilt trip’ them into coming to work because it’s understaffed in viral TikTok

'No is a complete sentence, and they aren't paying you for your time to talk on the phone with them.'

A video of an employee being asked to come into work on their day off as other employees called out due to COVID-19 has garnered 2.2 million views on TikTok.

Posted by @thelovieshow, a TikTok account held by a couple named Drake and Marie, the video shows a young person on the phone with their employer as they are being asked to come in on a day they are not scheduled.

“Yeah unfortunately we had some team members call out today due to COVID,” Drake’s boss says over the phone.

When Drake asks if “you don’t have anybody else,” their employer says no.

“I know you’re not on the schedule, but we were actually wondering if you could come in anyway,” Drake’s employer says in the video. “We’re a little short-staffed, so we could really use you.”

They then tell their employer “no” and to have a good night before hanging up. “So wanna go to Target? Wooo!” Drake says to their partner.

Commenters on the video are lauding Drake’s response and are pushing to normalize simply telling an employer “no” when they ask an employee to work on a day off.

“Normalize ‘No’ and hanging up,” one commenter wrote. “No is a complete sentence, and they aren’t paying you for your time to talk on the phone with them.”

Others accused the manager of attempting to “guilt trip” Drake into working.

“Managers really have the nerve to guilt trip you into going to work when you’re not supposed to be there,” one wrote. “Like, no.”

Others shared their own similar experiences, with one implying that such behavior led them to resign.

“I’ve had a manager demand an explanation why I can’t come in on my day off,” they wrote. “I quit lol.”

The Daily Dot has reached out to @thelovieshow via TikTok direct message and TikTok comment.