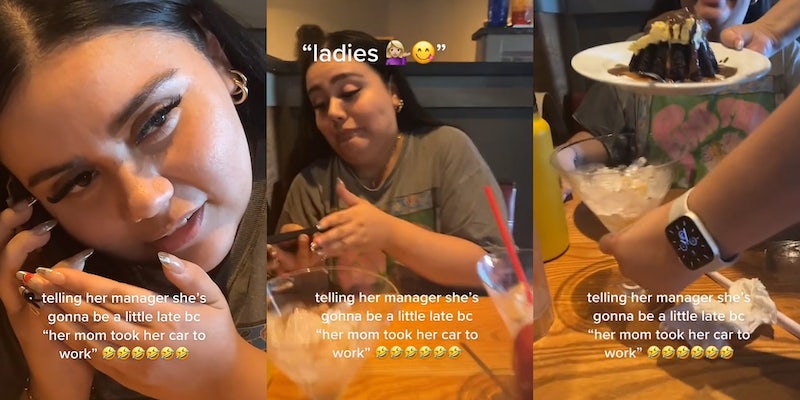 ‘Sometimes I say I’m having car troubles so I can take a quick 20 min nap‘: Worker lies to manager and calls out of work so she could finish her meal at Chili’s, sparking debate

'Not the chocolate molten lava cake.'

A worker allegedly called into work because “her mom took her car,” using the excuse to buy more time while dining at Chili’s Bar & Grill in a now-viral TikTok.

In the video posted by TikToker Alex (@alexandra.danni) on Aug. 9, she posts a clip of her friend allegedly on the phone with her manager while sitting in a booth at Chili’s.

The text overlay reads, “Telling her manager she’s going to be a little late bc ‘her mom took her car to work.'”

As soon as she hangs up, the server places a chocolate molten lava cake in front of her. The caption reads, “The timing of everything has me weakkkkkk.”

The video has reached over 722,000 views as of Thursday, with commenters sharing the excuses they’ve told their managers to get out of work or to clock in late.

@alexandra.danni the timing of everything has me weakkkkkkk 🤣🤣🤣 #fyp #chilis #greenscreen ♬ original sound – alex

“No but I told my work my grandma died cause I fckd my hair up when I was bleaching it and needed a couple days off to fix it,” one user shared.

“Sometimes I say I’m having car troubles so I can take a quick 20 min nap,” another shared.

“Called today and said I was gonna be late bc I was stuck in traffic. the traffic was the starbucks drive thru,” a third added.

“RIGHT as the Molten reaches the table,” they wrote.

When asked why she didn’t just call out, Alex commented, “bc she still wanted to get her bag she was just gonna be a lil late so we could eat up that lava cake.”

The Daily Dot reached out to Alex via TikTok comment.