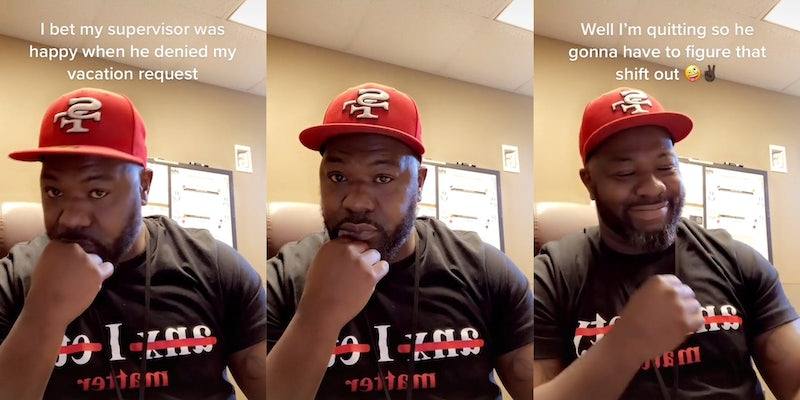 ‘PTO stands for prepare the others. Cause I. Ain’t. Coming’: Supervisor denied worker’s time-off request—so he quit

A man on TikTok says he quit his job of seven years after his supervisor denied his request for paid time off.

The TikToker, named Damion Draper (@deedraper23), shared a video of himself dancing out the door of his workplace. The video’s on-screen text says, “My supervisor denied my vacation time so I did what any Texan would do. I quit and walked out like this.”

A self-described “Life coach for children, adolescents, & young adults,” Draper has about 3,350 followers on the social media platform. His video received over 463,000 views as of Monday.

“I quit my job today after 7 years because my business started making me more money than my job in less than a year,” Draper wrote in the video’s caption.

Several viewers applauded Draper for prioritizing himself and refusing to let his employer deny his time off.

“People putting themselves first in 2022!!” one viewer commented on the video.

“I love when people do this… baby you can’t tell nobody they can’t go! You is not nobody mama,” a second viewer commented.

A third said, “Good for you! I’ve never understood time off request because I’m going regardless [laughing emoji].”

Other viewers said they never let their employers say no to requests for time off. Their “requests” aren’t really requests, they’re statements.

“Whew I really feel for those who have 2 ask 2 be off. I wish more companies understood how 2 manage better. It’s 2022. I’m not asking, I’m informing,” one TikTok user said.

“I be quitting when people be asking for a reason or for a doctors note for proof of why I called off.. like you are not my parents lol,” another user said.

Someone else wrote, “PTO stands for prepare the others. Cause I. Ain’t. Coming.”

However, one viewer didn’t believe that Draper actually quit his job. “lol, you ain’t quit,” they commented.

In reply to the comment, Draper shared a new TikTok that showed his resignation letter, dated June 29, the same day he shared the original video.

In the letter, Draper apologized for not providing more notice of his resignation but said he had received another opportunity that would be a “blessing” to his family. He added that he had “so many things” he would like to say, but he has learned that his words “hold no merit” at the organization.

“I will only say that this organization serves many black and brown individuals yet has no incentive in place to hire or retain more black and brown employees,” Draper wrote in the letter. “After seven years of employment with the organization, I have felt undervalued, belittled, discriminated against and not respected as a clinician.”

The Daily Dot reached out to Draper via TikTok comment.