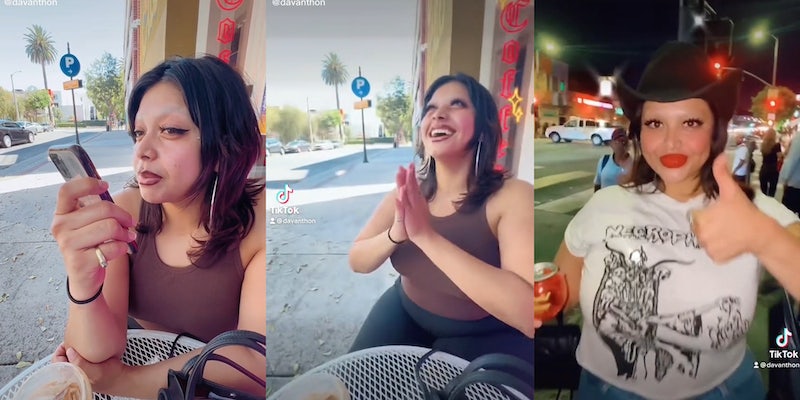 ‘I’m not going to be showing up today or any other day’: Worker calls boss and quits on the spot, sparking debate

'It’s all fun until the bills be due again.'

When looking for a new job, workers are often worried they’ll get stuck with bad management. Other than low wages and bad working hours, one of the biggest priorities for anyone in the job market is avoiding an overbearing boss with a bad attitude.

That appears to be precisely what happened to this woman in a viral TikTok posted by user @davanthon.

The video was originally posted on the Aug. 14 and already amassed over 860,000 views. It shows David Anthony (@davanthon) filming his friend while she calls her boss and quits over the phone. She says, “I’m scheduled to come over right now at 2:30 but I’m not going to be showing up today or any other day”. She continues, “So I just want to let you know, It’s pretty unbearable being around you, thank you” and then she ends the call. The boss, who was seemingly caught by surprise, only gets to interject with an “OK.”

Commenters sparked a debate underneath the video. Some were quick to side with the worker.

“Y’all be calling? I just go ghost,” another claimed.

But others took a more cautious stance and tried to be more charitable toward the boss.

One commenter expressed their doubts that the boss deserved all the blame, saying, “Maybe it’s unbearable for her too.”

“The boss sounded unbothered,” someone else commented.

The TikToker who posted the original video later posted the aftermath of the call, in which the girl who just quit appeared to be partying and celebrating that she was free from the toxic environment.

An outpouring of support filled the comments section of this video. One called the former worker a “vibe,” while others said, “love this for her,” “You go girl,” and “Yessss leaving a toxic job is a whole ass vibe.”

But one commenter doesn’t believe this story will have a happy ending, saying, “It’s all fun until the bills be due again.”

The Daily Dot reached out to @davanthon via Instagram direct message.