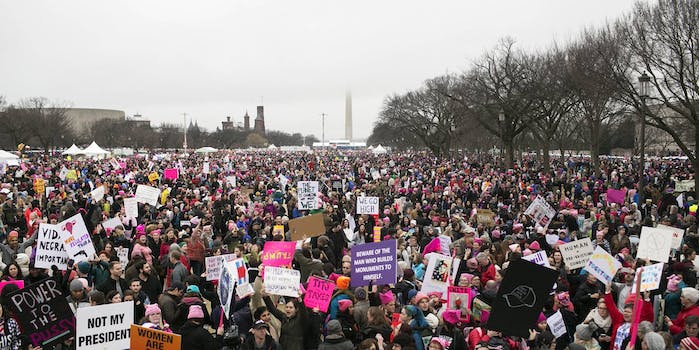 Why women are leading the resistance, not men

The more marginalized you are, the more dire the fight.

Right after Donald Trump’s inauguration, I got an email that was cc’d to about a dozen women friends of mine. The sender cited a piece from Mashable calling for women around the country to form their own “pussy posses.”

The equation of vaginas with gender aside (writer Cassie Murdoch did say vaginas weren’t necessary), the idea was to find a group of women with which to “share the work of staying informed and fighting for change.” My group would be meeting at a Le Pain Quotidien to write postcards to our representatives. Children, significant others, and needlepoint projects were all welcome.

In the months since the election and days since Trump took office, “pussy posse” organizing efforts such as these have become the norm. The Women’s March on Washington is the most obvious example of women leading this recent charge, but other, smaller efforts have for the most part been spearheaded by women. The majority of the immigration lawyers who showed up at airports to defend detained refugees and residents were women. Glamour’s “5 Email Newsletters You’ll Actually Want to Open” for the purpose of political organization and action, were all started by women. Safety Pin Box, a subscription box designed to educate white people and to give money to other black women, was started by two black women.

And let’s not forget that even at the highest levels of enacting change, there was the judge whose late-night ruling stopped the deportation of visa holders, the judge who issued a restraining order against Trump’s executive orders, the attorney general who stood up to Trump, the two Republican senators who stood up to the appointment of Betsy DeVos, the Republican representative who stepped down because she “didn’t believe I could make that commitment” not to criticize the president: All of them also women.

From lifelong activists and politicians to people just discovering that protest works, the most marginalized are the ones organizing, speaking up, and resisting. Because they’re the ones with the most to lose.

Emily Ellsworth, author of Call the Halls: Contacting Your Representative the Smart Way, went viral after the election for tweeting about how calling your representatives is the most effective way to contact them. Her tweets became the foundation for initiatives like the65 and 5calls, which are galvanizing followers with their easy steps on how to pressure senators and representatives against Trump.

“Women have to get their messaging, tone, and appearance exactly right to be taken seriously. When you have to work under those conditions daily, it stands to reason that you get good at resisting.”

Ellsworth tells the Daily Dot that women have been at the forefront of political activism because “historically, women have not had a lot of political power—women of color in particular. This means that through our learned experience and through the experiences of our mothers and grandmothers, we know that if we want to be heard, we’re going to have to get creative.”

She also says there are higher expectations for white women and women of color based on gender and race. “Women have to get their messaging, tone, and appearance exactly right to be taken seriously,” she says. “When you have to work under those conditions daily, it stands to reason that you get good at resisting.”

It is a human instinct to fight when one is personally threatened, which is why in the face of threats to womanhood, religion, race, public land, science, and democracy as a whole, more people appear to be reacting. In the past, it has been easy to section things off into “women’s issues” or “race issues,” and see them as the responsibility of those affected by them. Threaten everyone, and everyone shows up.

But it is the most marginalized among us who are threatened the most often, and thus, have an easier time empathizing and acting with other marginalized people even if they don’t share their exact struggle. The more oppressed you are, the more mental gymnastics it takes to ignore oppression.

America: If only someone had warned us!

Conversely, the more privileged you are, the less that oppression personally affects you, the less urgency you perhaps have to get involved in the fight.

When I very un-scientifically asked the progressive white men of my Twitter feed whether they had been asked to join a social justice organizing group like mine, none of them had. What’s more, it had not occurred to any of them to start one themselves. Individual men responded recognizing their privilege and wanting to follow the lead of women of color who knew better than they, showing they were aware who was doing the work of activism. But they still fell short of organizing other progressive white men under common causes. For example, even HeForShe, an initiative to get men to stand up for women’s rights, was started by women.

It’s hard to fault anyone for wanting guidance from those who have been doing this the longest, since that’s what they’re often encouraged to do, and when people try to organize large movements without experience, things go wrong. But there’s a difference between organizing a national protest and starting a group text to remind each other to call senators. Men appear to be fine fighting on their own. Women see the power in numbers.

That’s especially true for women of color. Leslie Mac, one of the creators of Safety Pin Box, previously spoke to the Daily Dot about reaching out to white people as a woman of color who has long been on the frontlines. “The question black women get most often [from white women] is ‘What do I do?’” she said. “It’s why the response [to Safety Pin Box] from black women has been so positive specifically, because they actually have a place to send folks that come to them asking this.”

Mac recognizes the emotional labor involved in being the one to always answer that question, which is why they went with a pay model. “We came up with this idea of providing some guidance and putting it into a format that doesn’t harm black people, doesn’t harm people of color. Because a lot of times these interactions can be painful.”

According to Shireen Mitchell, activist and founder of Digitalsista, much of the reason women of color are so often on the front lines is because it’s work that needs to be done, and they don’t see anyone else stepping up. “Women of color are always taught to build community to get things done, and in my opinion, most white men are taught that they can only succeed if they are the ‘savior’ for the community. With this mindset, they know they can’t really do that job when it comes to inclusivity because of their inherent bias.”

That leads to white people, especially white men, waiting to act until they feel they will be acknowledged and congratulated for their work. “What we need is for them to take initiative, grow from being uncomfortable and making mistakes. Use their privilege to elevate those who are taking the lead and not add to taxing or using their labor,” says Mitchell.

That knowledge of community organizing, inclusivity, and intersectionality is what builds great movements. Movements that aren’t about “saving” any one community, but about empowering them. And while white women and women of color should be acknowledged for their work, activism is not about turning people into redeemers or putting people on a pedestal.

It’s an ongoing struggle to ask people to fight for things that don’t directly affect them and, as Ellsworth says, not everyone has the empathy needed to look beyond themselves. “But I think there are a fair number of people who do, who are looking for some validation and backup to get to work.”

Women recognize this about other women. Which is why they’ll continue to take it upon themselves to get others involved.