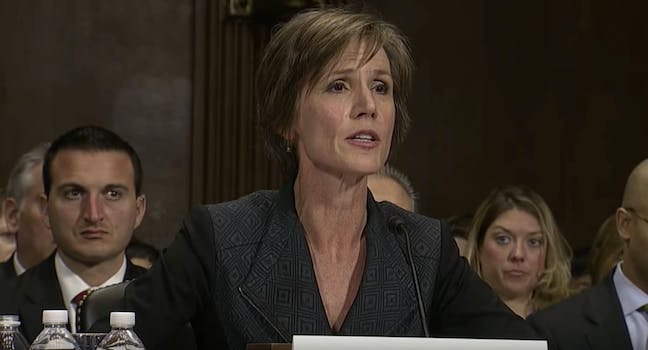 The U.S. attorney fired for defying President Donald Trump‘s executive order banning immigrants from several predominantly Muslim nations may receive a prestigious award for standing up to the president.

Democrats showered Yates, an Obama administration appointee, with praise after she ordered the Department of Justice in a letter to not defend Trump’s executive order banning travel from seven Muslim-majority countries. The Trump White House fired Yates on Monday soon after she issued the letter.

Members of President John F. Kennedy’s family created the JFK Profile in Courage Award in 1989 to “recognize and celebrate the quality of political courage that he admired most.”

The award has gone to public officials, many of whom took political risks in order to achieve their aims. Last year’s Profile in Courage Award went to former Rep. Bob Ingliss (R-S.C.), who changed his views on climate change after interacting with scientists abroad. Ingliss faced intense opposition from the Republican Party as a result of the shift in his beliefs.

“During a time of increasing public cynicism, recognizing and honoring our courageous political leaders has never been more important,” states the JFK Memorial Library website.