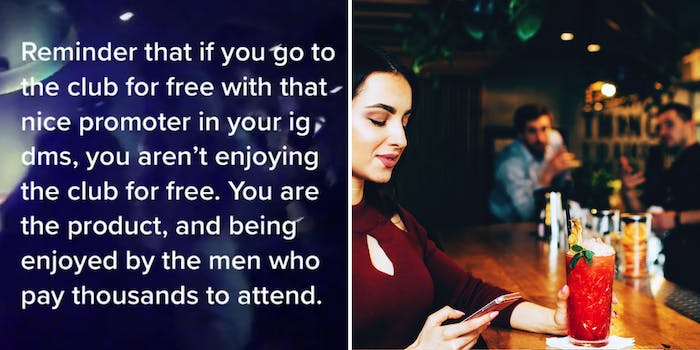 ‘You are the product’: Viral TikTok claims women who go out to clubs with promoters for free are selling themselves, sparking debate

'That’s only if you make yourself accessible.'

Clubbing as an institution is rife with warnings about keeping your drink covered and not letting friends go home with strangers—but one creator on TikTok is taking it a step further by warning young women approached online by club promoters that their intentions may not always be good.

The video posted by user @quesquiat shows people dancing in a club with a text overlay warning them that people may be going to the club to enjoy the women themselves, and less so the music and drinks.

@quesquiat I am not criticising you if you do this, because it’s easy to get swept into. But don’t let it flatter you, they are the ones who are getting the better end of the bargain I promise you. #maddox #mayfair #mayfairclubs #reign #sw #sugardating #nightluxe #luxury #club #clubbing ♬ Sexy Chick (feat. Akon) – David Guetta

“Reminder that if you go to the club for free with that nice promoter in your (Instagram) DMs, you aren’t enjoying the club for free,” a text overlay on the video reads. “You are the product, and being enjoyed by the men who pay thousands to attend.”

In the caption of the video, they stated that they weren’t criticizing anyone who takes advantage of a club promoter’s invitation, but just trying to raise awareness of the practice.

“I am not criticising you if you do this, because it’s easy to get swept into,” they wrote. “But don’t let it flatter you, they are the ones who are getting the better end of the bargain I promise you. If you know you are the product being enjoyed and don’t mind, I am not judging. I am trying to spread awareness to younger girls who don’t know.”

Multiple commenters shared that they are aware of this system—even using it to their advantage to have a good time.

“Not if you know [you’re] the product and work it to your advantage,” one commenter wrote.

“Never spoke to a single man while being out on a promoter table,” another commenter wrote. “Once you establish you’re not accessible, they don’t even try.”

“That’s only if you make yourself accessible,” a commenter wrote. “You can still go with a promoter and not even talk to a single guy and have a good time.”

Other commenters were not as concerned and questioned the need to make the video in the first place.

“I see no wrong in that,” another commenter wrote. “Y’all just mad bout everything at this point.”

The Daily Dot has reached out to user @quesquiat via a comment left on the video.