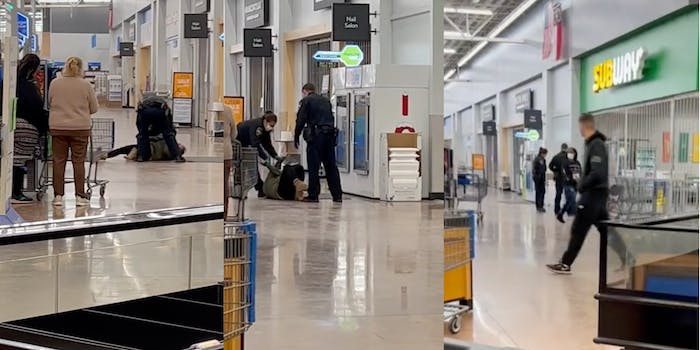 A viral video showing a disturbing scene following an alleged instance of shoplifting has divided viewers on TikTok, with some hoping for the woman involved to receive some sort of substance abuse or mental health treatment.

The video was posted to the platform by Eryn Oprea (@erynoprea), then reposted by Toni Mygind (@tonijeffs), with a caption that indicates that it was taken at a Jacksonville, North Carolina Walmart. In it, a woman is accused of trying to leave the store without paying for the items in her car. Then, she has a meltdown after being caught. Mygind’s repost received the most attention, with a total of over 4 million views.

*not my video* Woman was caught trying to walk out of walmart (jacksonville, NC) with a cart full of items she didnt pay for and has a melt down.

Oprea said that she and her husband had been walking out of Walmart when they saw a woman yelling, slamming her cart into the doorman, and being asked for her receipt “because they know she doesn’t have one.” Oprea stated the woman was a “repeat offender” at the Walmart.

“She genuinely is just going off,” Oprea said. “She’s telling them to get better jobs, and they need to get lives, cussing up a storm, like so irate. Genuinely, I just don’t stand for that. I wouldn’t want someone to stand by and let me be treated like that at my job. All I said was, ‘ma’am, these are minimum wage employees, you need to shut the fuck up,’ and she went off.”

From the footage shared by Oprea, a vast majority of commenters praised her husband for keeping the woman out of his wife’s face and acting as a barrier, while keeping her in check.

“Omg your husband defending you, that’s so cute,” one commenter wrote.

Speaking to The Daily Dot, Opera said she posted the video with the goal of allowing the woman’s community to hold her accountable. While she does not personally know her, she has friends who do, and she hopes the video puts some pressure on them to act.

“She has kids so she just really needs to think about how this affects them, and how it affects their family as a whole,” Oprea said. “I’m genuinely just hoping for the best for her.”

Oprea also said she wanted it to be clear when she posted the video that while mental health and substance abuse may have played a role, the woman in the video was still attempting to steal from Walmart. She also claimed the woman had posted publicly about drinking before going to Walmart.

“She was like stealing, this wasn’t just like a mental health episode or anything like that,” Oprea said. “She genuinely was drunk and stealing and not obeying the rules.”

Commenters who saw Mygind’s repost—without the context from Oprea—were more concerned about the woman’s mental health and acts in the video.

Many commenters fixated on the woman’s urination, while others wrote that they hope she receives assistance or treatment for whatever circumstances she is struggling with.

“This makes me honestly sad for this woman,” one commenter wrote. “She clearly needs professional help——not an internet full of laughing people.”

Some commenters suggested the meltdown did not come from a genuine place of struggle, but of avoidance, specifically for consequences.

“Everyone saying she needs help she’s going through a lot I’m sure she was perfectly calm when she was stealing and flipped out when she got caught,” one commenter wrote.

The Daily Dot has reached out to Walmart via email.