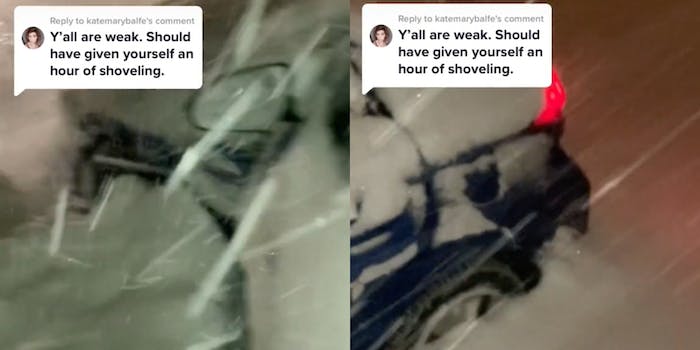 ‘No job is worth all of that’: Viral TikTok shows woman attempting to free her car and get to work during snowstorm, sparking debate

'I really wish the american work force didnt make us feel like we need to risk our safety...'

A woman on TikTok posted footage of herself trying to leave for work amid a severe snowstorm that had her car trapped in snow. Viewers had a lot to say about her attempt, sparking a debate in the comments on her video.

The TikToker, known as Madeline Smith (@maddee915) on the platform, captioned the video “The update I gave my boss at 4:30am.” The footage received about 3 million views on TikTok as of Tuesday.

Smith can be heard breathing heavily as she recorded the video, saying, “Ash, I’m not gonna lie, I don’t know if I can even back my car out because the snow’s up to the door. But I am trying, but this is really bad.”

Smith’s viewers were divided. Some said employees should never be expected to come to work in such conditions, while others said Smith could have tried harder.

“i really wish the american work force didnt make us feel like we need to risk our safety for the sake of their material gain,” one viewer commented on the video.

“Also, if roads are closed down and you wreck insurance won’t cover,” another viewer pointed out.

Several viewers commented what they thought Smith’s employer Ash would have said.

“And Ash said ‘ok get there when you can, drive safe,'” one viewer guessed.

Another user suggested, “Boss: and you can’t walk?”

Some viewers shared their own experiences with calling in during extreme weather circumstances, but one viewer disagreed, calling them “weak.”

“Y’all are weak. Should have given yourself an hour of shoveling,” the disapproving viewer wrote.

In a video response to the comment, Smith shared additional footage of the snowstorm and her half-buried car.

“I don’t think an hour would have helped me move much further than I did,” the TikToker captioned the video.

In a comment on that video, Smith explained that she was trying to go to work despite the storm because she didn’t have sick days at her job. She also stated she was scheduled to open that day. Fortunately for her, she was able to get another worker to cover for her.

TikTok user @maddee915 did not immediately respond to the Daily Dot’s request for comment via TikTok comment.