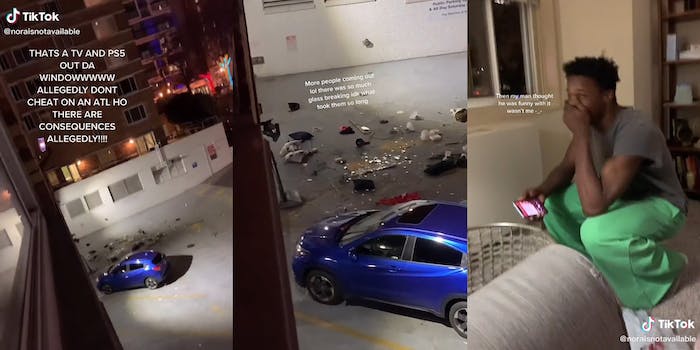 ‘The dangers of infidelity’: Woman throws boyfriend’s TV, PS5 out window after finding out he cheated in viral TikTok

Viewers took the woman's side.

A viral TikTok is making its rounds showing the aftermath of alleged infidelity between a couple in Atlanta.

The video, taken by the couple’s neighbor Nora (@noraisnotavailable) shows big items from a TV to a PS5 being tossed out of a window. Everything created a big pile of garbage in the parking lot of an apartment building.

In the corner a man, who appears to be the guy getting all of his stuff thrown out, standing with his arms wide open. The video has received over 367,000 views as of Monday.

“Don’t cheat on an ATL ho there are consequences allegedly,” the creator wrote in an overlay caption on the video. “I hope he got what he deserved,” she adds when the guy begins to walk away from the scene.

In a follow-up video, she gives an up-close look at the damage in the daytime. You can see the TV that was thrown from the window, clothing items, a lamp, and glass scattered everywhere.

The creator mentioned the police were called and neighbors apparently claimed the woman was later “found with an ax.”

Um an axe? Who snitched??

Despite the guy losing all of his personal items, those in the comments were backing the woman throwing out all of his things.

“I think its kind of sweet that she would give it back to him shes so kind and thoughtful,” one user wrote.

“Females from Atl are built different,” another person added. “We don’t play that.”

Some were upset that the PS5 took the brunt of the fight.

“Not me teleporting thru the screen tryna catch that ps5 because I still don’t have one,” a commenter said.

In Nora’s final update, she confirms that the pair did not get back together. She got this information from the apartment’s front desk.

“These are all just for educational purposes on the dangers of infidelity,” she adds.

She goes on to share the girl from the video throwing stuff out the window is getting kicked out of the apartment complex.