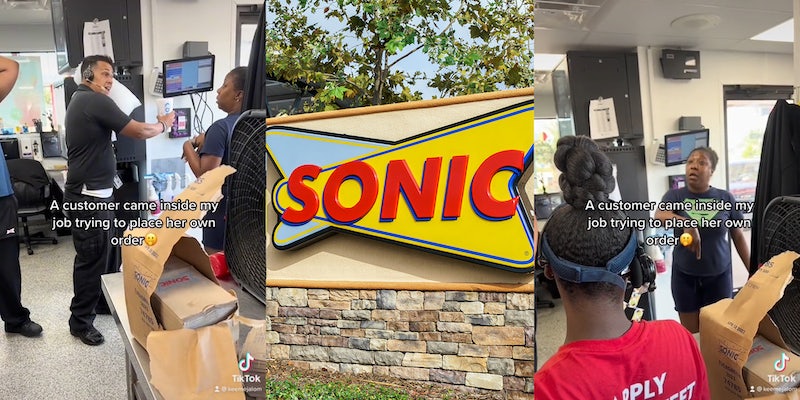 ‘It NEVER be this serious over fast food’: Woman attempts to take her own order at Sonic

A viral TikTok shows a woman attempting to physically input her order at Sonic in the restaurant’s kitchen.

In a TikTok posted by Hakeem (@keemejalom), a woman argues with Sonic employees and their manager in the back of the restaurant. She asks employees to put in her order while pointing to a screen that employees use for drive-thru orders. Hakeem identified himself as a Sonic employee in the video’s overlay text.

“You’re in my store and I’m asking you to get out,” the manager says to the woman in the TikTok. “I asked you to leave. It’s employees only, it states clearly on my door.”

The woman says she doesn’t care and pushes an item that the manager is holding, causing it to break and fall on the ground. In response, the manager takes out his phone.

On Wednesday, Hakeem’s video had over 5 million views.

“She want her food NOW,” Hakeem wrote in the video’s caption.

Commenters on the video praised the manager for taking charge of the situation.

“I love managers who will square up customers for their employees,” @jarnejohnson commented.

“He has to be a good manager for the employees to stick up for him,” @jazmenk wrote, referring to an employee heard saying “I’m gonna have to drag you” after the woman knocked over what her manager was holding.

“He say I DONT GIVE A DAMN ABOUT YOUR ORDER,” @raquelstevenson3 wrote.

Others agreed that the woman was out of line.

“It NEVER be this serious over fast food,” @tenom12 commented. “Especially SONIC.”

“My mom taught me never argue with someone preparing your food,” @091964red wrote.

“I never understand people that goes back to a store, restaurant , etc that wasn’t happy with the service,” @pcq34 commented. “Just don’t go back just that simple.”

“People don’t get paid enough to deal with someone like that,” @sleep_iam wrote.

The Daily Dot reached out to Sonic via email and Hakeem via TikTok comment.