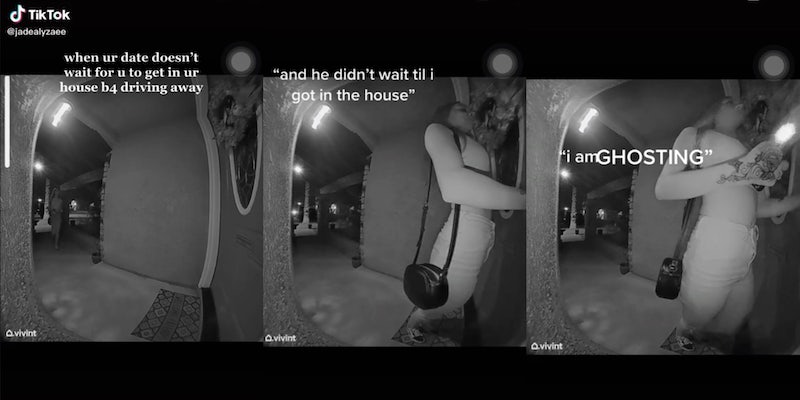 ‘I am ghosting’: Woman shares video of ‘red flag’ when date is dropping her off at home

A woman’s doorbell camera captured her date driving away before she got inside her house. She called it the “red flag number two” of the evening and pledged to ghost him.

The woman shared a video of the “red flag” to her TikTok account, @Jadealyzaee, on Saturday, and it’s been viewed 6.7 million times and liked 1.2 million times since.

“Red flag number 2, I am ghosting,” she can be heard saying in the video.

The TikToker revealed in the comments section that the first red flag was that her date did not open any doors for her.

The video sparked discussion in the comments section about what could happen if someone leaves before their date gets into their home safely, as well as other red flags.

Some were just as floored that her date failed to wait for her to get inside, with some noting they do for anyone they’re driving home late at night. “Some of y’all’s parents didn’t raise you properly,” a commenter wrote. “You always wait for the person to get into the house regardless of who it is.”

“I even wait for my homies to get inside,” another said.

One commenter said that even their Uber drivers wait until they’ve gone inside to leave.

Then there were others, suggesting that @jadealyzaee didn’t give him a fair shot, or that this isn’t something commonly taught.

“Pro tip: girls that ghost cause a guy didn’t open a door don’t get doors open for them,” another commenter wrote. “And if he drove away that fast… he had more than two flags.”

Another even suggested the man “dodged a bullet.”

And even then, some just felt that if he left that fast, he just wasn’t into it.

Others pointed out the possible consequences of not making sure that someone gets into their home safely before leaving.

“‘He didn’t wait cuz he didn’t like you’ good to know that if a man doesn’t like a girl he’s just gonna let her get raped and murdered lmao typical,” a commenter wrote.

The Daily Dot has reached out to @jadealyzaee about the video.