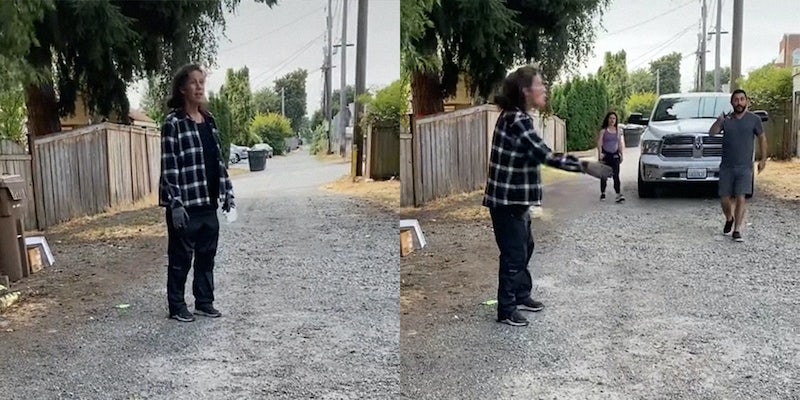 'This time you're getting arrested.'

A TikToker rented an Airbnb in Tacoma, Washington, and claims a woman “tried to kidnap (her) nephew.”

The TikToker, @kaitlinblack, filmed the encounter that she and her group had with the woman, who seemingly approached them out of the blue as the tell her to “get the f*ck out of here” and to “leave.”

Her first video of the incident has amassed over 962,000 views and 105,000 likes since it was posted on Thursday. Captioned, “Rented an Airbnb in Tacoma, Washington and some wigged out lady tried to kidnap my nephew,” the 3-minute long video features a woman asking the group for her “antlers.” They tell her they do not have what she is asking for.

The tenants claim in the clip that the woman has mental health issues, but the woman refutes that claim, saying, “I’m not a mentally ill patient” and accusing them of attacking her.

The apparent owner of the Airbnb property then drives around the corner in a white truck 50 seconds into the video and exclaims, “This time you’re getting arrested,” implying that this is not the first time the woman has harassed his tenants.

“You assaulted someone,” on of the tenants tells the woman. “You’re lucky we didn’t knock you the f*ck out.”

The tenants and the woman get into a screaming match. Many of the tenants can be heard shouting at her, “That’s not your kid.”

In the video the woman, dressed in a black-and-white checked shirt, is accused of trying to take off with one of the children belonging to a tenant.

“Despite what’s going on she literally still tried to get in the car and steal my niece and nephew, so she’s getting arrested,” says @kaitlinblack in the video.

@kaitlinblack posted part two of the incident the same day that part one went up. Part two, which has over 166,000 views and 10,500 likes, shows the woman shouting.

“I know you told me to leave, but my son is in the back seat,” she says, seemingly referring to the TikToker’s nephew.

“That’s not your son,” somebody else answers.

The woman continues to yell at the passerby as they wait for police and as she tries to walk away from the scene.

Daily Dot reached out to @kaitlinblack for comment via TikTok message as well as the Tacoma Police Department.