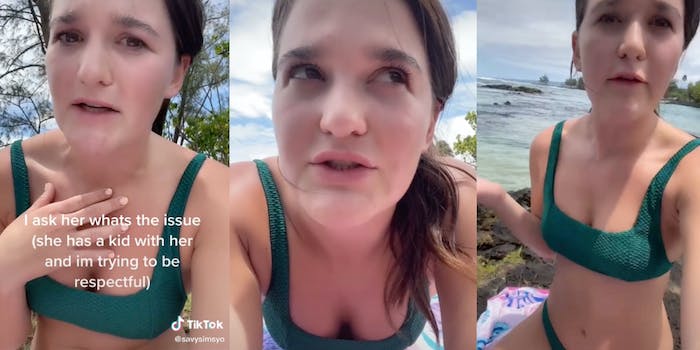 ‘I would’ve stayed and twerked’: TikToker says a mother forced her to leave beach over her bikini

‘Not your fault her boyfriend has wandering eyes.'

A TikToker recounted how a mother forced her off the beach in what she described as “the worst experience in Hawaii” in a viral video.

In the video, which has been viewed 1 million times since being posted on April 10, TikToker Savannah Sims says she was on a beach in Hawaii when a woman, who was with her children and boyfriend, confronted Sims over the bikini she was wearing.

“The mom starts saying to her boyfriend, ‘No I can’t have that,’ and ‘That’s not OK with me,’” Sims recalls. “I look up and she’s looking at me, so I ask if there’s an issue. She said she doesn’t want to see my butt and lady parts.”

Sims says the woman then demanded Sims leave the beach. “She wanted me to leave. I was in her way,” Sims says. “So I got up and left. … It ruined my day.”

But what baffled Sims was that the woman was in a thong bikini herself. “(It’s) totally fine, I wear those all the time. But to call me out, and then take off your skirt and be rockin’ a g-string—either she’s a hypocrite or it wasn’t about what I was wearing,” Sims revealed in a “part 2” video.

Sims filmed the video right after the confrontation. “To be clear, this is my bathing suit—pretty friggin’ normal right?” she says, holding the camera up to show her bikini.

Many TikTokers suggested that the woman must’ve felt insecure and untrusting of her boyfriend to react in such a way. “Not your fault her boyfriend has (wandering) eyes,” one said.

“Sounds like she’s insecure. That’s her problem not yours don’t sweat it,” another assured Sims.

Others took issue with Sims abiding by the woman’s demand and noted what they would’ve done if they were in Sims’ place. “I would’ve stayed…. And twerked,” one said.

“You should of never left!! Nothing is wrong with what you have on,” another said.

The video also sparked a conversation about the negative impact tourism has on native Hawaiians. “Maybe she is a local and tired of (tourists). But they need to be nice,” one pointed out.

“Ik tourists can be a lot when you live in Hawaii, but keep in mind that the world isn’t yours, it’s to be shared,” Sims’ own caption reads.