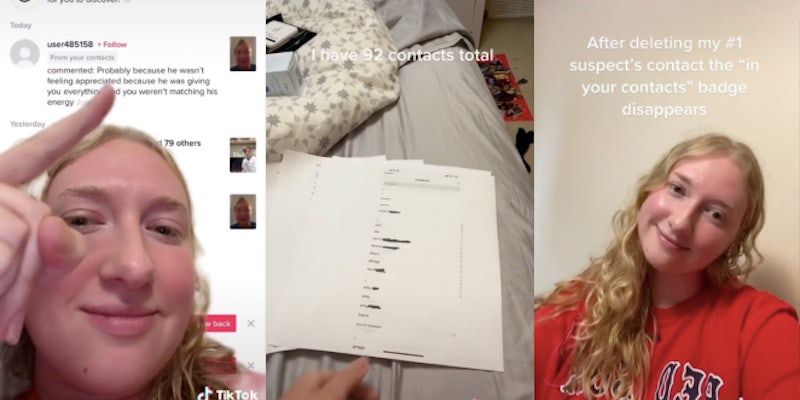 ‘Not even the FBI could work like this’: Woman shows off sleuthing skills by exposing man who harassed her on TikTok

'It's like they forget every woman is a detective when they need to be.'

A woman details the step-by-step method she used to figure out which one of her contacts left her a hate comment from an anonymous account in a now-viral TikTok.

In the video posted by TikToker Rachel Everest (@araccoon82) on Aug. 23, she shows a screenshot of a comment left on her previous video in which she discusses being cheated on by a man who “said all the right things” and “completely swept her off her feet.”

The comment on the video reads, “Probably because he wasn’t feeling appreciated because he was giving you everything and you weren’t matching his energy.” Everest then shows the “From your contacts” tag next to the account, revealing that the anonymous user is someone she knows.

In the following clip, Everest says that she has 92 contacts total, printing a list of each of her contacts to narrow down who the anonymous user could be.

“Assume it’s their main account based on following count. Eliminate all of my mutuals,” the text overlay reads, describing her method. “Eliminate anyone listed as ‘in your contact.’ That brings me down to just under 50 possible options.”

She continues that she also eliminated anyone she “knew would never comment this,” including “smart women.”

“Go a step further: openly feminist men, old people. This leaves me with 17 potential options,” the text overlay continues. “Go through their following to find clues… find lots. Assume he can’t be over 25 because he’s following Olivia Rodrigo??”

Everest says that her initial “inspection” left her with seven potential men that she suspected would leave a hate comment on her video. She then deleted those seven contacts one at a time until the ‘From your contacts’ tag disappeared from the anonymous account, revealing who the user is.

“Let’s not act like your misogyny wasn’t part of the reason you got fired :),” she wrote at the end of the video.

The TikTok has reached over 4.3 million views as of Aug. 24, with users praising Everest’s investigation skills.

“Not even the fbi could work like this,” one user said.

“It’s like they forget every woman is a detective when they need to be,” another wrote.

“Add this to your resume and send it to the FBI, they need you bestie,” a third added.

Others shared additional methods to narrow down the identity of anonymous commenters that seem to be in your contacts.

“Next time, try to log in with his username and click on forgot password it will show their email or number censored but with enough information,” a commenter wrote.

After posting her investigation video, the anonymous account deleted his comment. In a comment pointing this out, Everest responded, “he’s still young and can learn, I genuinely believe my call-out is enough in this case without ppl knowing who he is.”

The Daily Dot reached out to Everest via TikTok comment.