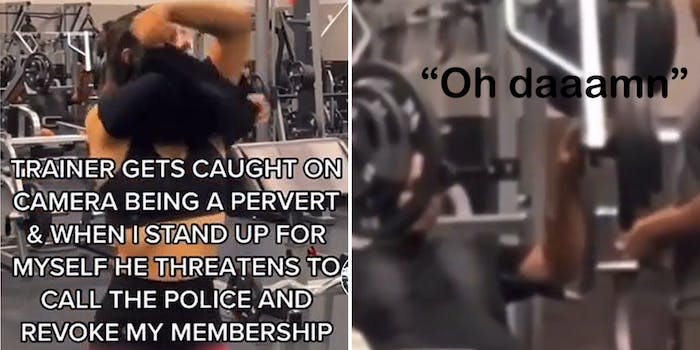 Woman exposes gym worker for being a ‘pervert’ while she takes off her shirt, but not everyone agrees he did something wrong

The internet is divided after a woman posted a video calling a man a 'pervert' at the gym.

A video of a woman taking off her shirt before working out has gone viral after she called a gym worker a “pervert” for looking at her.

However, not everyone agrees the worker was looking at her or said, “Oh damn,” as she claims he did in her video. The clip upset commenters.

“The tiktok generation has the worst main character syndrome I’ve ever seen,” a Twitter user commented.

The controversy started after TikTok user @adrianaafariass posted a video of herself taking off her shirt before starting her workout at the gym. The text overlay and voice-over say, “Trainer gets caught on camera being a pervert & when I stand up for myself he threatens to call the police and revoke my membership.”

Before the original creator went private, TikTok users were able to screen record or re-share her original video or comment on the situation. Several videos showing her original clip and offering commentary on her video have gone viral., like the one posted by TikToker @realraywilliam which has 3.9 million views.

The woman’s original video slows down and slowly zooms in on two men in the back of the gym who were also working out. A caption shows the man apparently saying, “Oh damn,” as one of the men looks back.

The TikToker then shows the confrontation between herself and the man. She repeats several times, “Do you need something?” The man, who commenters claim is an employee of the gym, says, “No?”

After a back and forth between the two, the woman tells the man to “keep it pushin.’” The man responds by telling the woman, “If you’re getting rude you can leave. Nobody was looking at you any type of way.”

Since clips of her videos have been re-shared by TikTok users, people had the chance to chime in on what happened or didn’t happen.

“If you look closely, he only turned around because the guy he was training was looking in that direction. She definitely was reaching with this,” one user commented. “Not taking nothing away from women who do get harassed this was a bad reach.”

“She said that he said ‘Oh damn’ but you can see he was talking to his homie even before lookin n’ [and] just kept his conversation going he didn’t say non,” another user commented.

Users also debated whether the woman was justified in her actions and what constitutes creepy staring in the gym culture.

“Women who actually don’t want to be looked at in any way shape or form, don’t go get cute gym outfits & stand in the front of the gym. They wear baggy clothes and wrap their hoodies around their waist. Stop it! She wants to be looked at, it just wasn’t the right people looking,” a Twitter user commented after a video of a response to the woman’s video was posted.

Another Twitter user commented, “I love how all the men is this coming aren’t defending her because she’s a women working out in a mens gym. I agree with what she did because they do that all the time.”

Other users have posted now-viral videos commenting on the incident.

Popular fitness creator @thejoeyswoll, known for posting videos fighting toxic gym culture, shared her original video. His video, which has 6.9 million views and 16,900 comments, commented, “Just because somebody glances at you briefly when taking your pump cover off doesn’t give you the right to post a video on social media labeling them as a pervert..”

@thejoeyswoll There are perverts in gyms that harass women. He is NOT one of them. #MYOB ♬ original sound – Joey Swoll

He acknowledged that women in the gym do get harassed and that there are creeps in the gym but said, “This is not that.”

The creator also said he talked to the man involved in the video “to get more context” on the situation and shared more details about the man in question. He said the such the man is an overnight gym attendant who has “the power to call the police or ask you to leave so he was not wrong in doing so” and “never said ‘oh damn.’”

“If you watched the video closely, he briefly glanced at you when his friend looks, you put the words ‘Oh damn’ which he never said and you slow it down to make it seem as if it’s longer,” Joey said.

Joey said that he looks at people all the time at the gym as an admirer of “the gains” but that “doesn’t make me a pervert.”

The TikToker who shared the video has gone private on social media, and the Daily Dot was not able to reach her for comment.