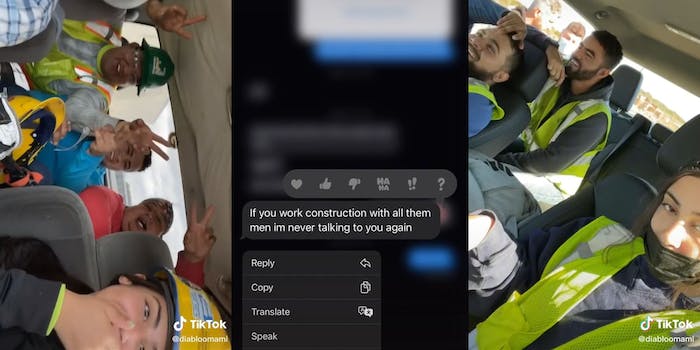 ‘It’s always a man who’s not offering to pay your bills that’s trying to tell you where to work’: Man tells woman he will never talk to her again if she works in construction

'He mad u getting more money than him.'

The woman, Ari (@diabloomami) on TikTok, shared a screenshot of the text she received, presumably from a man.

“If you work in construction with all them men I’m never talking to you again,” the text said. After showing the screenshot, Ari showed a series of photos and videos showing her job as a construction worker.

“It’s a fun job sometimes,” Ari wrote in the video’s caption. As of Thursday, the TikTok video received about 1.8 million views and more than 2,800 comments.

Its a fun job sometimes

Some viewers said the man was simply mad Ari would be making more than money him as a construction worker. They applauded the TikToker for pursuing the job.

“He mad u getting more money than him,” one viewer commented with an eye roll emoji.

“Ya bro but you making bank though so,” another viewer commented.

Some viewers said the man shouldn’t have an opinion about Ari’s employment unless he was offering to pay her bills.

“Is he offering to pay your rent and take care of you? If not seems like he needs to know his place and keep quiet,” one user said.

Another user wrote, “It’s always a man who’s not offering to pay your bills that’s trying to tell you where to work.”

Multiple viewers commented that the TikToker probably gets treated like a “princess” or “royalty” working with all men as a construction worker.

“If only they knew how well us girls get treated! ROYALTY!!!!” one viewer said.

“Hell yes girls!!! working with guys is fun,” another viewer commented. In reply, Ari said, “Sure is.”

A third viewer wrote, “being a women in construction is like being a diamond in the middle of pebbles ! you go Girl.”

The Daily Dot reached out to user @diabloomami via TikTok comment.