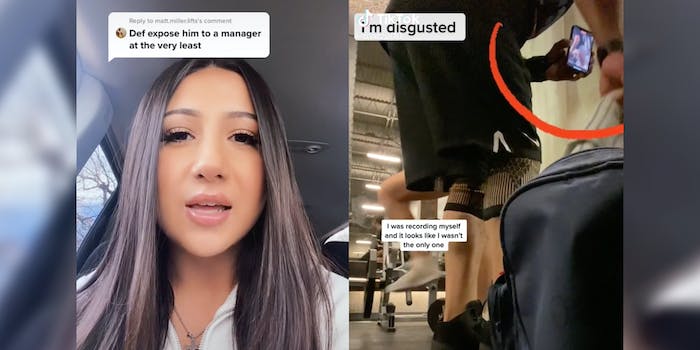 ‘I was recording myself and it looks like I wasn’t the only one’: TikToker catches man secretly filming her in gym

'I felt so disgusted. My stomach literally dropped.'

A man filmed a woman at the gym without her consent—and she caught the whole thing on video.

TikToker @marziii10 was recording herself doing a workout when a man in a black ensemble stopped directly behind her, put his gym bag down, and appeared to take a video zoomed in on her backside. The man then walks away without telling the TikToker he was filming her.

“I was recording myself and it looks like I wasn’t the only one,” @marziii10 said. “I’m disgusted.”

@marziii10 walks by the guy and picks her phone up from where it was recorded almost immediately after the guy starts to walk away. She clarified in the video caption that she didn’t notice what went down until she watched the video in the car.

The post was captioned with the hashtags, “wtf,” “gross,” and “what do I do.” The viral video already has more than 1.6 million views on the app.

While there were a lot of sexist comments from those defending the man’s behavior, many other viewers called him out on his behavior. Women in the comments said situations like this are why they don’t feel comfortable going to the gym.

“Guys totally forgot about consent. It’s almost as if they don’t care about it. Makes u wonder what they do,” Erika Gonzalez said.

In a follow-up video, @marziii10 explained that she was recording herself to check for progress and form. The phone was leaned against one of the workout machines and when the man walked by she assumed it was in his way so she went to pick it up and apologized to him for the inconvenience.

When she did replay the video and saw what happened the TikToker said her “stomach literally dropped.”

“He’s lucky I was running late for work, otherwise I would have ran in there and been like, ‘What the hell?'” @marziii10 said.

Various people in the comments section suggested @marziii10 reach out to a manager to give her access to the gym’s video footage and to get the man’s membership revoked.

@marziii10 reached out the gym’s assistant operations manager to review the footage and identify the man so she can file a report.

“I don’t even think I want to address all the comments that I see because it’s a literal war zone in those comments and I’m just baffled to say the least on some of those comments on that video,” @marziii10 said.

In a third video, @marziii10 added that she’s going to deal with the rest of the situation offline because it seems her videos are going “on the wrong side of TikTok” since she’s getting harassed by people defending the man.

“If you don’t see a problem you are the problem,” she said.

The Daily Dot reached out to @marziii10 via TikTok comment.