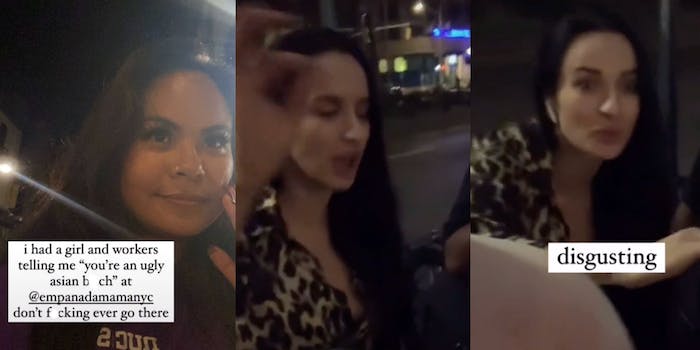 The TikToker alleges that the workers supported the woman.

In a viral video posted Friday, a woman tells TikTok user @dennydoestiktok, or Denise, that “Asian bitches are ugly” three times outside of the restaurant Empanada Mama in the Lower East Side neighborhood of New York City.

The video has garnered 351,000 views and 39,000 likes. It is tagged #StopAsianHate. The TikTok starts with a still of Denise, captioned, “I had a girl and workers telling me ‘you’re an ugly asian bitch’ @empanadamamanyc don’t fucking ever go there.”

The actual video begins as Denise reiterates what the woman told her prior to the start of the recording, that “Asian bitches are ugly.” The woman affirms that is what she said, then repeats the statement.

The video then cuts to the woman throwing more insults at the TikToker, now seemingly unsure as to what Denise’s race is and trying to assume other possible ethnicities.

“You’re a fucking ugly fucking Mexican, fucking Hawaiian, whatever the fuck you are,” the woman tells Denise.

Denise replies that she’s waiting for someone and the woman mocks her response. The video cuts again, showing the woman calling Denise a “Chinese little bitch.” In a text overlay on top of the video, Denise says the woman’s “POC boyfriend” was “egging her on.”

“Get that on camera,” the woman says in reference to her racist insults.

Denise goes on to claim in text overlays atop the video that the Empanada Mama workers “just stood there and supported” the woman’s rant.

Giovanni Morales, general manager of Empanada Mama’s 9th Avenue location, said that the staff reviewed security footage from that night and interviewed team members present. According to Morales, prior to the events shown in the TikTok, Denise had refused to follow staff orders to wait for her food outside. She was allegedly intoxicated and “being extremely disrespectful” to staff. The woman in the video intervened when Denise allegedly began mocking the security guard, and Denise called her out on white privilege.

After this encounter, the two were escorted outside by a security guard, and the incident with the racist remarks in the TikTok occurred while outside of the restaurant. Morales said staff inside the store were unaware of the verbal altercation happening outside. The security guard, who was sourced from a third party, was let go from Empanada Mama for failing to diffuse the situation, Morales said.

Viewers were outraged on behalf of Denise and sent her messages of support under her video.

“Insecure that’s all it is,” one commenter said.

“I know you don’t need anyone’s validation but you’re a gorgeous woman, that witch was full of hate!” another wrote.

“Thats sad,” one user commented. “It’s sad the hate people show. She probably doesn’t love herself to show hate on other women.

In a comment, Denise said the general manager for Empanada Mama called her to apologize. The Daily Dot could not verify the identity of the other woman in the video.

The Daily Dot reached out to Denise for comment but did not immediately hear back.

This post has been updated to include information from Empanada Mama’s staff.