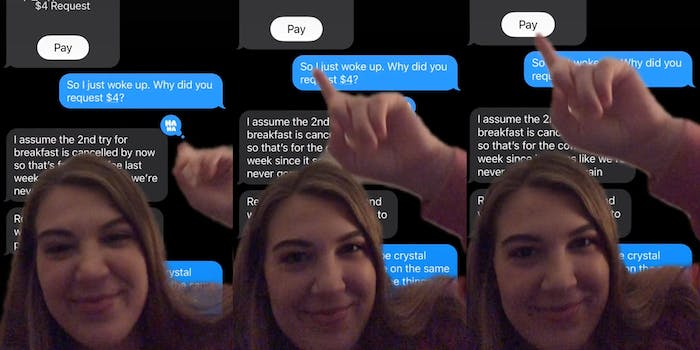 ‘The audacity’: TikToker calls out man for requesting $4 via Apple Pay after saying he’d pay for their coffee date

He wanted his money back after they couldn't schedule a second date.

TikTok user Katlyn Phipps (@katlyn_phipps) exposed her bad date for having quite the audacity in a viral video. After she went out for coffee with the man, he requested $4 from her via Apple Pay to cover her drink order.

In her video, Phipps shared a screenshot of her conversation with the date. The video received nearly 100,000 views on TikTok as of Saturday.

Things men have: the audacity

The text screenshot shows the date’s $4 Apple Pay request, with Phipps replying, “So I just woke up. Why did you request $4?”

Her date sent back two messages, saying, “I assume the 2nd try for breakfast is canceled by now so that’s for the coffee last week since it seems we’re never gonna go out again. Really just don’t understand what games you are trying to play.”

The screenshot only showed part of Phipps’ response to the explanation, but it was clear she went off on him. The part of her message shown in the video said, “Okay [well] let me be crystal clear so that we’re on the same page. Let’s get some things straight before I humble your…”

Several viewers commented on the post, saying they wish they had seen the rest of that text message.

“I WANNA SEE YOU HUMBLE HIM,” one TikToker commented in all caps.

Some viewers said they would have been embarrassed to request $4 from a date, while others said Phipps should actually send it just to embarrass the man.

“I would be EMBARRASSED to request $4,” one user said.

“Just send the $4 so he’s embarrassed for even doing that,” someone else suggested.

In a follow-up video, Phipps said she’d met the man on Hinge and they went for a coffee date. She ordered a medium coffee and he offered to pay for her drink. However, when she couldn’t meet up for a next date because of her busy schedule, he requested his money back.

She also posted the rest of her response in the follow-up.