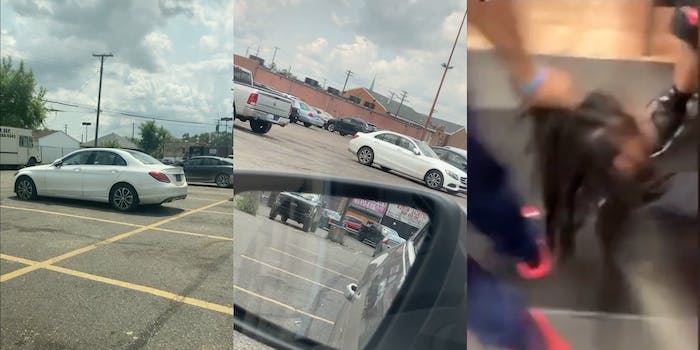 Video: Woman tracks down man who stole her car, confronts him with her fists

'He messed with the wrong one!'

Video footage shows a Detroit woman tracking down the man who she believes stole her Mercedes Benz, hitting him, and filming him being dragged from a barbershop by his dreadlocks.

Fox 2 Detroit’s coverage of the incident was shared in the subreddit r/PublicFreakout, where users said the alleged criminal got what he deserved.

“That was a Good Ol Fashioned Public Beat Down. Good for her,” one user applauded.

“Good for her she’s a badass. He messed with the wrong one!” another said.

The woman, Bianca Chambers, tracked her car throughout the city for two days, documenting the entire experience on her Facebook page. When the alleged thief parked her car and went to get his dreads twisted, she confronted him.

“At that point, I was like…I’m not letting this man walk again,” Chambers told Fox 2 Detroit.

She walked into the barbershop and asked the man if the Mercedes Benz in the parking lot was his. When he denied it, she attacked, and later another customer is seen pulling him across the floor by his dreadlocks.

“Dragging him around like a toddler drags a doll,” one user commented on the Reddit post. Another person pointed out the “look on his face as he’s being dragged by his hair.”

Customers stepped in to make a citizen’s arrest while Chambers slashed her own tires so that he couldn’t drive off in her car again. Then she called the police.

Detroit Police reportedly responded four times to Bianca’s emergency calls as she tracked the car using social media tips. However, each time officers were called, the car was gone by the time they arrived.

Although she now had to deal with her slashed tires, the thief apparently had gotten the car detailed during his escapade. According to the Fox 2 Detroit report, the suspect had a history of car theft.

On Facebook, Chambers wrote, “I know my story sound crazy but it really is a movie. I had to record every min of this situation. I didn’t wanna harm anybody but I wanted my car that I wrk hard for ain’t no way around it . I let him get off  for 2 days in a row and Wednesday he thought he was bout to jump fresh no way.”

Chambers did not respond to the Daily Dot’s request for comment.