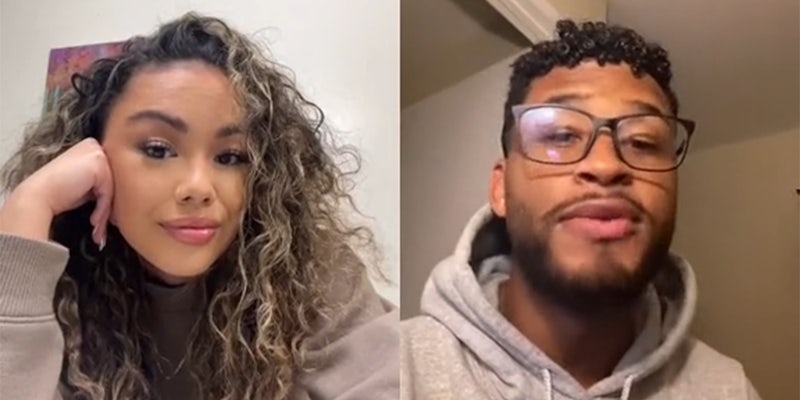 ‘Avoid him at all costs’: Woman finds date’s TikTok criticizing her for saying men shouldn’t control their girlfriends’ outfits

'If you can't deal with what your girl's wearing, then you have trust issues.'

A woman has taken to TikTok to set the record straight after she went on a bad date and later found the TikToks that her date posted about her.

On March 3, Michelle Lee (@michelleechat) duetted a video posted by the man she went on a date with, TikTok user @defundsimping, who makes content about dating “for men who wanna do better with life, confidence, purpose, and women.” Lee stays silent during the video so viewers can hear how @defundsimping recounts their date, but nods and mouths words from time to time.

@defundsimping says that Lee is “very, very pretty,” but that there was “no sexual tension at all” between the two.

“It just felt like two coworkers hangin’ out on a lunch break,” he says, to which Lee mouths “agreed.”

@defundsimping then says he asked Lee “what [were] some of [her] turn-offs,” and she said “a guy that controls what she wears.” Her date says he asked her if she meant a boyfriend or just a man she was seeing, and Lee said “a boyfriend.”

“I was like ‘nah, like if I have a girlfriend and she tries to dress like a hoe? She ain’t my girlfriend no more,” @defundsimping says in his TikTok, which was posted on March 2. He then says Lee disagreed, and then the two decided to move to another location and drive separately.

On the way there, @defundsimping claims Lee sent him a text saying that “respectfully” the pair wasn’t “going to work out,” and that she was going to head home.

Lee’s video has been viewed over 3 million times; her date’s TikTok has over 775,000 views.

Lee posted a follow-up video telling her side of the story. In it she says that the date “took a turn” after @defundsimping made the remark about wanting his potential partner to dress a certain way.

“But he did not act as hard as he’s trying to make it seem like he did,” Lee says, before mouthing, “He was a pussy.”

Lee says she told @defundsimping that she didn’t feel that there was a “difference” between how someone dresses when they’re in a relationship versus when they’re single.

“It’s a trust thing,” Lee says in the TikTok. “If you can’t deal with what your girl’s wearing, then you have trust issues.”

She says @defundsimping told her that “girls show more skin to get attention from men.” When her date asked her if she wanted to go somewhere else, Lee says she already wanted to go home. But she says she agreed to meet him elsewhere because she was flustered.

“If you see this guy, avoid him at all costs,” Lee says, after saying that she never wants to see @defundsimping again.

Comments on Lee’s duet with @defundsimping roasted her date.

“I don’t understand,” @champagnec0c0 commented. “He was abandoned mid-date and he’s teaching men what exactly?”

“Imagine going on a date with a guy and then finding out he has a Tik Tok called ‘defund simping,'” @andora.marr wrote.

“I love how he posted that wholeheartedly thinking that he was right in that scenario,” @gabygabss commented.

Some comments even discussed @defundsimping’s comments on how women dress.

“Why do guys think we dress FOR them?” @itsmerogue1 wrote. “I’m not trying to tell anyone I’m available.”

Others tagged Drew Afualo, a TikToker who shuts down and shames misogynists.

The Daily Dot has reached out to Lee and @defundsimping via emails.