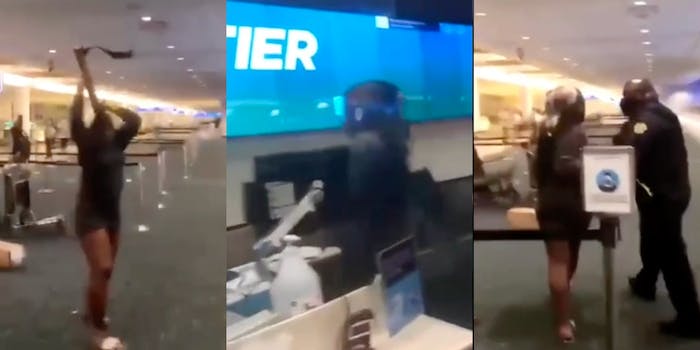 'Did she think that this behavior was going to get her flying privileges reinstated?'

A video showing a woman attacking Frontier Airline employees after allegedly learning she is on the “no fly list” has Redditors concerned for her children.

The video was posted to r/PublicFreakout and has gained 5,500 comments, many criticizing her reaction or expressing concern for her children, one of which can be heard crying and asking her to stop as she carries on.

She can be heard loudly saying, “Don’t fuck with me.”

The video shows the woman arguing with an employee at the counter who says “You’re not flying with Frontier.” The woman insists that she needs a ticket for the next day, but the employee again denies her a flight. Her child cries out, “mommy,” before the woman tells her to be quiet. Then, she goes behind the Frontier counter and begins attacking employees, throwing keyboards at them. After leaving the scene for a moment, she comes back, picks up a pole, and starts swinging it toward the workers. It’s uncertain where the incident took place.

The “no fly list,” according to the Transportation Security Administration, is a “small subset” of the U.S. terrorist screening database, or watchlist. People on this list are often identified as terrorists or presenting “terroristic threats.” However, passengers have also been placed on the list this past year for refusing to wear a mask on their flights. It’s unclear if the woman is actually on the no fly list, and if she is, the reason why is unknown.

“Did she think that this behavior was going to get her flying privileges reinstated?” u/AnotherShipToaster wrote. “Like, why would anyone other than a small child or a wild animal act this way? How can an adult human being be this lacking in the capacity for rational thought? I have so many more questions…”

Another commenter wrote that the video was “hard to watch,” with the woman’s child crying—seemingly terrified—in the video.

“Man that was hard to watch.” u/Destinoz wrote. “Those poor kids are terrified while their mother, the person they depend on for everything, loses total control of herself and seems to try to get arrested. She needs to get her anger issues in control before she ruins the lives of those kids.”

In response to u/Destinoz, u/SnapCracklePapSmear wrote that they fear the children will likely be recovering from experiences like this for a long time.

“‘hard to watch’ is an understatement, here,” u/SnapCracklePapSmear wrote. “I can usually scroll through PublicFreakouts and not bat an eye, but this… goddamn. My heart. Those poor children. She’s already ruined their lives– there’s hope, I think, but it’s going to take a lot of work, and even more therapy… :(.”

The Daily Dot has reached out to Frontier Airlines regarding the incident.