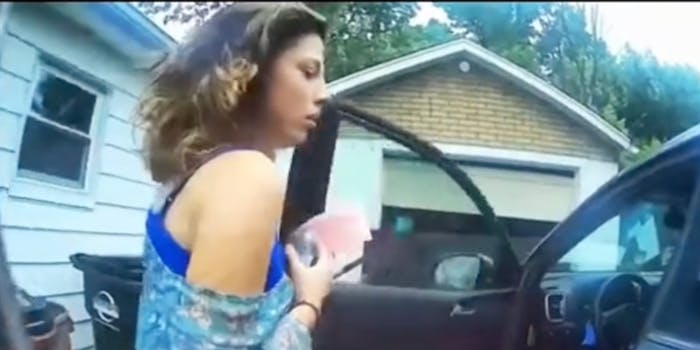 A video of a woman being arrested after leaving her dog in her car overnight is going viral on TikTok. The incident happened in June in Parma, Ohio and is garnering renewed interest after racking up over 2.4 million views on the platform.

Kasey Wise was arrested and charged with cruelty against a companion animal, according to FOX8. She called 911 because she was locked out of her car and saw her husky motionless on the back floorboard. Police arrived at the scene at 2:45 pm ET on June 4, but Wise reportedly told the dispatcher the dog had been in the car since 4 am.

The video starts off as the officer hands the woman a ticket and begins unlocking her car with a tool. Once the car is open, the officer tells Wise to get her dog, but as he walks away he is heard saying that he believes the animal is dead. An animal control officer, later identified as Julie Kocik, then arrives at the scene.

“He’s gotta be [dead], he’s been in there all night,” the officer tells Kocik.

Kocik peeks into the car and says, “If he’s dead, I want her fucking arrested.”

Wise is heard saying it wasn’t her fault because the car died. Kocik confirms that the dog had died and tells the officer to arrest Wise. A subsequent video shows Wise being escorted into the back of the police car.

Viewers on TikTok shared Kocik’s outrage, declaring that they would have broken their own car windows before letting their dogs stay in a locked vehicle overnight.

“I would have broke my car window before I left one of my pups in the car overnight!!!” one person said.

“Fun fact – I spent $498 to replace a window bc my dog was locked in a car,” another user wrote. “Worth every penny spent!”

FOX8 also reported that Wise’s neighbors told investigators she had previously left the dog in the car for extended periods of time. She also had racked up 20 animal-related citations since September 2020. Cleveland.com reported that Wise is currently serving an 180-day sentence for previous charges in addition to facing felony charges related to her dog’s death.