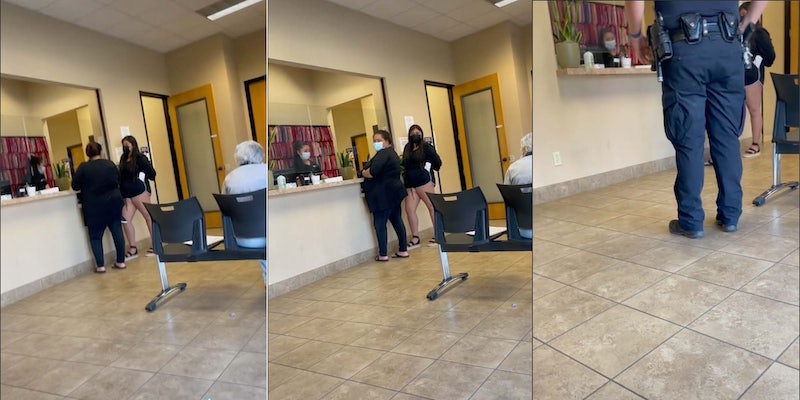 ‘This little boy was f*cking hot as sh*t and crying’: TikToker shames woman for allegedly leaving her kid in hot car

The police department said she had a sick child that she took to urgent care and 'her small child jumped in [her] vehicle unknowingly.'

A TikToker shamed a woman for allegedly leaving her son in the car while inside an urgent care in Palm Springs, California.

“This lady forgot her whole ass son in her van,” says @shawtyyduwop in the now-viral clip, posted on Aug. 26. “Or supposedly, she didn’t even know her kid was in the van to begin with.”

Before police arrive, the woman turns to @shawtyyduwop and asks her if she’s recording. @Shawtyyduwop says “sure am.”

“To let the police know who you are because they weren’t showing up,” says @shawtyyduwop. She then says that the police officer who arrived on the scene—as shown in the video—said the woman was crying, felt bad, and “has too many kids, she couldn’t keep track.” The TikToker says that the woman wanted to get her daughter checked into the urgent care in a hurry and forgot the child.

When asked about the woman in the video, Lt. William Hutchinson of the Palm Springs Police Department told the Daily Dot that the woman had a sick child that she took to urgent care and “her small child jumped in [her] vehicle unknowingly.”

The Palm Springs Police Department looked to see if there were any past allegations of negligence against the mother and didn’t find anything.

In a followup video, @shawtyyduwop explains that the young boy escaped from the van and ran into the urgent care crying. “This little boy was f*cking hot as shit and crying,” the TikToker says.

The TikToker says she then went to the van, saw it was unattended, and asked people in the surrounding area if the boy was their child.

The TikToker also says that the mother saw the child and initially didn’t claim him.

When no one identified themselves as his parent, the urgent care office reportedly called the police. The mother in question, according to @shawtyyduwop’s explanation of what police told her, allegedly said she didn’t know that her son was in the car.

“To me, it doesn’t make sense,” says @shawtyyduwop said in a second followup video. “It’s just crazy that it’s fucking 2021 and we’re still having to tell fucking people to ‘check your car for your kids.'”

She also emphasized that in Palm Springs, temperatures are regularly higher than one hundred degrees Fahrenheit. According to the Washington Post, which spoke with National Highway Traffic Safety Administration (NHTSA) experts for a report published in August of 2021, there have been roughly 900 hot car deaths involving children since 1998. About half of such deaths reportedly happen after a guardian mistakingly thinks they dropped the child off at preschool or day care.