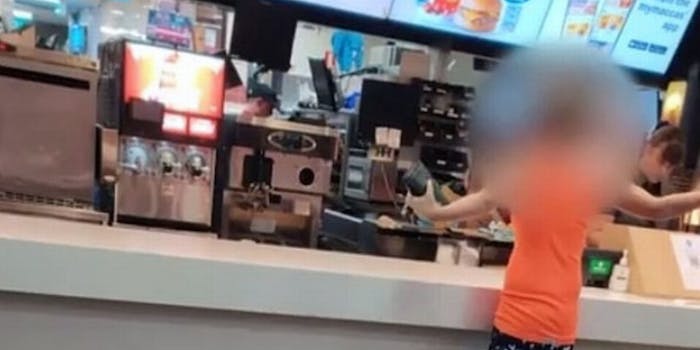 Woman berates McDonald’s workers as child begs her to stop

'You can’t even cook a fresh f*cking meal.'

An Australian woman was fined after she went on a tirade in a McDonald’s over the time it took to fulfill her order.

According to Mirror, footage posted to a local Facebook group shows a woman yelling to McDonald’s workers behind a counter in Kempsey. Meanwhile, a young child jumps up and down beside her says, “Stop it, mum.”

“Twenty f*king minutes … Don’t tell me to f*king settle when you can’t even cook a fresh f*cking meal,” the woman yells. “Everyone here is fed up with this f*cking restaurant.” Bewildered staff members are heard asking her to “settle down.”

After seeing the video, the Mid North Coast Police Department confirmed it took action against the woman. Mirror reports she was levied a $500 on-the-spot fine for “offensive behavior.”

Authorities claim they received reports that a 28-year-old woman aggressively abused a number of McDonald’s employees, including teenage workers. They also said the woman voluntarily visited the local police station the day after she was contacted by officers and “showed considerable remorse.”

Local police also said it was “continuing to provide support to the staff involved” after the ordeal, the Queensland Times reports, and affirmed the incident was an opportunity to remind the community that “conduct, language and [behavior] must meet minimum community standards, and those that fall below those expectations, can expect action to be taken.”