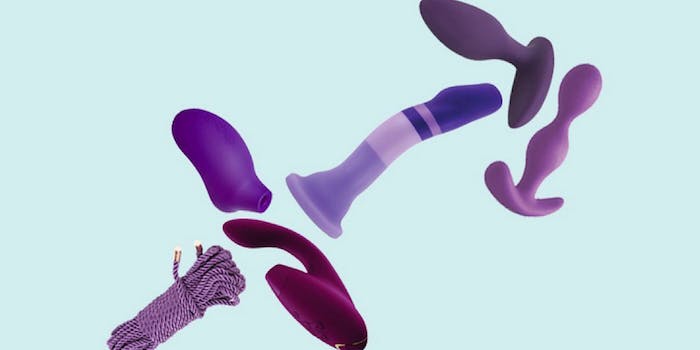 A Black- and trans-owned sex toy store says that a white sex toy company is trying to shut it down following a trademark dispute over the name “enby,” which is a term sometimes used to describe nonbinary people.

Wild Flower, aka @wildflowersex on Instagram, launched its Enby toy in June 2019. The company says the toy is “designed for everybody” and that its versatility is “designed to please a variety of bodies.”

“We’ve worked tirelessly to create and perfect Enby over the past year, and we are incredible proud and excited to share it with you,” reads the caption an Instagram post promoting the toy. “We hoped to create a toy that anyone could enjoy, regardless of their anatomy or identity.”

In late October, Wild Flower issued a cease-and-desist order against Enby, demanding the store immediately abandon the name as well as any website or social media related to it. Enby shared the ordeal in an Instagram post on Tuesday that has received more than 17,000 likes.

“We must request that you immediately cease and desist promoting, marketing, advertising, offering to sell, selling or distributing any and all sex toys and related goods using the ENBY mark or any colorable limitations thereof, including but not limited use in any domains and social media handles and/or usernames,” reads part of the letter shared by Enby.

Wild Flower told the Daily Dot that because Instagram and Shopify website both use the Enby mark “for which WildFlowerSex has the common law trademark,” it requested that the trademark be “respected” via the removal of any reference of the name from ecommerce platforms.

Since October, Enby has been gearing up to fight out the lawsuit and started a GoFundMe fundraiser to secure legal defense. The campaign has raised more than its $25,000 goal.

“We fundamentally believe that no one can own the term ‘enby,'” Enby’s GoFundMe description says. “Enby is a descriptive term that under law cannot be trademarked … This would be as if a sex toy company was trying to claim ownership of the word Gay, Lesbian, Transgender, Bisexual or Queer. These are terms that belong to all of us in the community.”

Enby did not immediately respond to the Daily Dot’s request for comments.

Wild Flower says that the company has “acquired common law rights” for “Enby” from having “sold sex toys extensively throughout the United States and internationally under the ENBY mark.”

According to a U.S. Trademark Application decision from 2019, Boyajian Products, which owns WildFlowerSex, was refused an application to trademark the term “enby” on the grounds “that the goods are specifically designed to be used by persons who are ENBY.”

The decision explained that denying the request would ensure the owner of the product is not “inhibiting competition in the marketplace” and to “avoid the possibility of costly infringement suits brought by the trademark or service mark owner.”

Since Enby posted its grievance on Instagram, many have come forward to show their support, some citing past incidents where Wild Flower was accused of racism.

“They have demonstrated time and time again that they will stop at nothing to line their pockets, choosing specifically to exploit the most vulnerable people that they purport to support,” one Instagram post says.

Unbound Babes, another sex toy and body-safe merchandise company, also shared support for ShopEnby. “Unbound stands with Enby in the belief that any word that is an identity cannot and should not belong to any sole individual or company,” the company’s Instagram post said.

In an August 2019 Medium article about anti-Blackness by the owners of Wild Flower, author Evyan Whitney shared that the company had badmouthed Unbound Babes for allegedly not being transparent about their funding.

“Unbound also asks that companies within the sexual wellness space do more than just speak out about this,” Unbound Babe said in its Instagram statement. “To those who still sell their products on Wildflower’s website, please consider that by partnering with Wildflower, you are communicating support for their actions and participating in the harm they do to the communities they claim to serve.⁣⁣”