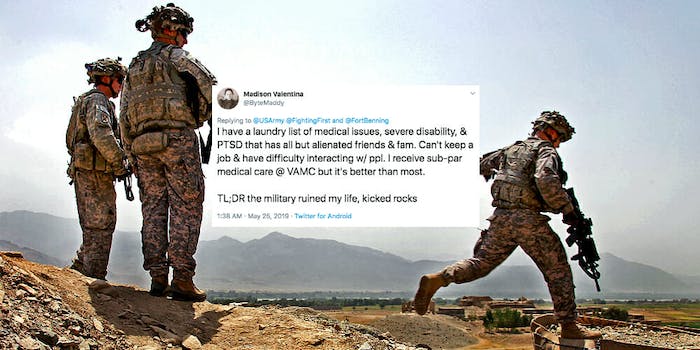 The U.S. Army started the hashtag as a catalyst for positive stories.

A hashtag started by the U.S. Army to illustrate how serving in the military has changed peoples lives for the better, has backfired into a thread about how it’s ruined people’s lives.

The U.S. Army shared a video of Private First Class Nathan Spencer on Thursday, just ahead of Memorial Day weekend.

“The Army supported me the opportunity to do just that, to give to others and protect the ones I love and to better myself as a man and a lawyer,” Spencer says in the video.

Hear from Pfc. Nathan Spencer, a scout with @FightingFirst who shares how the #USArmy has influenced his life.

“How has serving impacted you?” the U.S. Army asked in a follow-up tweet.

While Spencer’s post was likely supposed to inspire others to share similar stories, it spiraled into a rather morbid thread about the numerous ways serving in the military has entirely changed people’s lives—and not for the better.

There were stories about addiction among veterans.

When I got out of the Army in 2010, I became addicted to heroin. It was my only escape. I lost my family, ended up in prison, in and out of jail more times than I can count, and am now luckily coming up on 2 years clean this August. I'm 30 years old with the mind of an 18 yr old

One of my best friends came back from Afghanistan with severe PTSD that led to heroin addiction. He kicked that, only to trade it for alcoholism. We graduated HS in 2001. Literally his entire adult life has been dealing with the shit he saw.

My stepbrother served in desert storm. Suffered terrible PTSD and the subsequent alcoholism and addiction issues almost killed him. In the end tho it was the paranoia and nightmares. He always kept a gun under his pillow and accidentally shot himself.

The most common accounts were of post-traumatic stress disorder (PTSD) and mental health trauma among people who had served in the military.

My transgendered sister who came back from Korea she spent months in therapy. Recently, after having PTSD related breakdowns and losing 3 jobs, has started several new meds and therapy. She won't tell us what happened to her.

The PTSD my aunts uncles and grandpa are experiencing in post their service is unexplainable I’m blessed that most are still here. But the trauma they brought home has affected their spouses children and grandchildren immensely

Many continue to suffer from various health issues after they return, and it’s exacerbated by the U.S. Department of Veteran Affairs’ (VA) reported lack of initiatives to help them out.

I do not know why, but my grandfather's transportation unit came back early from WWI. He had three funny stories he would tell about his service when I was a kid and that was it. My grandmother said he was sick as a dog, digestive system "ruined" when she got him back.

My cousin came home from Vietnam, and committed suicide.

My father’s service gave him 4th stage lung cancer, he died at 61. He wouldn’t let me join when I was 18 because he knew how women are treated.

My BFF served in Iraq, and got severe PTSD from it.

They were all Army.

My grandfather served in this branch & the Navy, he now has Alzheimer's & Dementia; the VA does little to nothing to seriously treat these diseases, they also won't help with financial support to put him in a full time care facility

I have a laundry list of medical issues, severe disability, & PTSD that has all but alienated friends & fam. Can't keep a job & have difficulty interacting w/ ppl. I receive sub-par medical care @ VAMC but it's better than most.

Some detailed health effects veterans suffer because of what they were exposed to during their time at war.

My father proudly served in Vietnam. He died an excruciating death from diabetes complications that may have been the result of agent orange exposure while transporting it. Apparently theres a connection there, but since he couldnt prove it he wasnt eligible for some benefits.

Many shared accounts of the suicides of loved ones.

and was found on a park bench. Single gunshot wound to the head.
Just one story of how not all service related deaths come with ribbons or medals. I’m sure there are many more. I haven’t read comments here because it breaks my heart. #VeteransDay

People shared how some service members bring back the violence into their own homes due to the trauma they’ve experienced.

Others pointed out how recruiters target young, desperate individuals right before it’s time to go to college.

The enlisters prey on 17 year olds that can’t afford college (aka most 17 year olds). Your point is invalid.

War is a reality when you are thinking about enlisting! Understand before you sign up for the college $. Both of my daughters served and one is 100% disabled with PTSD and could care less about college now. I loved my time in the Army but my girls did not. War is HELL!

Served 4 years in the Army, including 5 months in Saudi Arabia during Desert Storm. No traumatic experiences. I used to recommend the military as a way to earn $ for college, but no longer do since those who enlist are now virtually guaranteed to be involved in an unnecessary war

The thread barely has any positive accounts of #WhyIServe.

As a Scout: I met fantastic people, I gained a useful skillset, I grew into a strong leader I got to do some cool shit. Downside: I lost 2 brothers in war, others since then,I became an alcoholic, homeless, depressed,feel useless,VA cares more for money than us yet you do nothing

It was obvious the thread had gone in an entirely opposite direction of its intended course.

People called on the VA to finally take action.

I am so sorry for your pain and the loss of your friend and co-worker. When will Veterans Affairs wake up to the travesty that's happening to our WARRIORS: homelessness, PTSD,mental illness, drug addiction to name a few.

STOP sweeping these VA problems under the rug. SHAMEFUL

On Saturday, the U.S. Army responded to the experiences in a tweet.

“To everyone who responded to this thread, thank you for sharing your story. Your stories are real, they matter, and they may help others in similar situations,” it wrote. “The Army is committed to the health, safety, and well-being of our Soldiers.”

“Why can’t the U.S. military actually put its time and effort into helping those who served and came back a completely different and damaged person. why do we glorify veterans if we don’t help them after all the trauma they have had to live through and still struggle with,” wrote one user in response.

Mindfulness and actually doing it are two very different things.

Try harder and do better, particularly when peoples’ lives are at stake

Then Just. Do. It. I am so fucking tired of hearing about how you are going to “take care of us.” The VA is a train wreck. The DOD could care less about doing anything other than saying they cannot confirm Agent Orange exposure. Airborne application= exposure for miles.