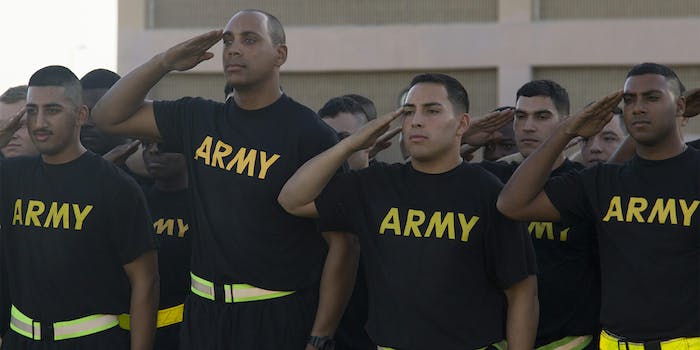 Veterans speak out about the U.S. Army discharging immigrant recruits

At least 40 recruits have been discharged so far—and they may be up for deportation.

Immigrant recruits who enlisted in the U.S. Army as a part of a pathway to citizenship are being suddenly discharged, and veterans want answers.

According to a report by the Associated Press, there are no official numbers yet on how many recruits and reservists have been discharged, but immigration attorneys say there are at least 40. They also say that some of the recruits were not given a reason for their discharge.

Spokespeople for the Army and Pentagon said that they’re not able to provide explanations or answers, due to pending litigation, but the Department of Defense did respond to fears about the discharged recruits’ legal status. “All service members (i.e. contracted recruits, active duty, Guard, and Reserve) and those with an honorable discharge are protected from deportation,” the DoD said in a statement.

However, immigration attorneys say that the discharge the immigrant recruits are getting are “uncharacterized” rather than honorable or dishonorable, leaving them vulnerable. Multiple discharged recruits who spoke to the AP did so anonymously, for fear of what will happen to them if they are deported and people find out they served in the U.S. military. One discharged recruit from Iran said to the AP, “If I am not eligible to become a U.S. citizen, I am really scared to return to my country.”

The news has sparked outrage among veterans, who have been sharing their stories of serving with immigrants in the military. An advocacy group for veterans has also stepped up, demanding information and due process for the discharged immigrants.

Look at this Navy pic, this pic was taken onboard USS Jason 1st Division in the 80's. 2 of the guys in this pic were not US citizens, 1 is from Fiji and the other from the Philippines. They were serving to gain citizenship. That's me in the foreground. #ThrowbackThursday pic.twitter.com/IeOmIMwCO5

90% of MAVNI Reservists are passing their background security checks according to DOD. 10% have failed & are being discharged but they haven’t been afforded due process to review their results. RT & tell the @USArmy to follow their own policy of appeal. https://t.co/hqZJs93Qsz

Other people shared stories of grandparents and parents who became U.S. citizens through military service, highlighting the country’s long history of immigrants serving in the military.

My great grandpa becoming us citizen during World War One over 100 years ago. He was born in Austria-Hungry, an enemy during this war obviously. pic.twitter.com/gKPAGFvOY2

This is only the latest move by the Trump administration to prevent immigrants serving in the U.S. military from gaining citizenship. In late 2017, hundreds of immigrant recruits in the middle of their enlistment process had their contracts canceled, and later it was announced that the immigrant recruitment program, MAVNI, would be canceled indefinitely.