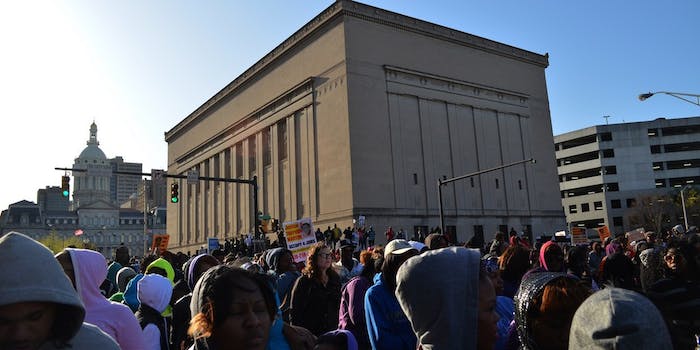 And the company's explanation leaves us scratching our heads.

Whole Foods posted, and then conspicuously deleted, photos of a downtown Baltimore location offering free food to the National Guard on Tuesday.

Posted by the grocery giant’s Facebook and Twitter accounts of the Market Harbor East location—a new, giant, “flagship” location for the corporation—the photos showed a group of five smiling National Guard members. Both the store’s Facebook and Instagram accounts showed the same caption:

We Teamed [sic] up with Whole Foods Market Mt. Washington to make sandwiches for the men and women keeping Baltimore safe. We are so thankful to have them here and they’re pumped for Turkey & Cheese!

So this is what a Whole Foods in Baltimore is doing… pic.twitter.com/5gyNia0KuC

Tuesday marked the first time Baltimore has seen National Guard presence since 1968, thanks to protests, looting, riots, and violent conflicts between civilians and police, all stemming from the police negligence-related death of Baltimorean Freddie Gray.

In a statement provided to the Daily Dot, Whole Foods mid-Atlantic representative Katie Malloy said that “the Harbor East store removed the Facebook post because we realized it reflects only one of the many ways we are helping out.” When the Daily Dot said that it was confused by that response and asked for a clarification, Malloy didn’t respond.