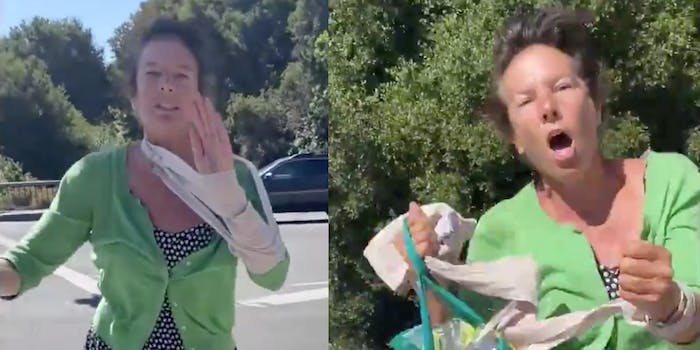 She was cited for misdemeanor child abuse.

A white woman has been caught on camera hitting a Black teenager while screaming at him hysterically to get his camera off of her, according to video shared online.

The 23-seconds long video shows the woman screaming hysterically at the boy, who has been identified as 17-year-old Steve Johnson Jr. by NBC Bay Area.

Johnson Jr. told NBC that he was stretching for his daily jog on Thursday morning when he heard this woman behind him “getting really loud and yelling belligerent things,” asking him to get out of her way.

Another woman nearby reportedly told him to capture it on his camera.

The video starts with the woman screaming, “You understand?” and charging at him, with her finger raised.

“Get the [inaudible] off of me,” she says as she takes her bag off her shoulder around her neck.

“Get away …You know this…this…this,” she screams, and makes a strange “ahah” sound as though to imitate stuttering. “Get it away!”

Then there’s a smacking sound, as the camera drops for a few seconds.

“Get your [inaudible] camera off me!” she screams.

For a couple of seconds, the video is inaudible, before Johnson Jr. is heard again saying he’d call the police, while the woman screams, “get your camera away from me.”

At some point in the exchange, the woman hit the teen with her bag.

This is the latest in a series of such attacks against Black people. While this video did not capture any race-targeted rhetoric, Johnson Jr. told NBC Bay Area that he felt targeted because of his race.

He also said as a trained boxer, he did not feel safe reacting the way a normal person would to such a situation, because that would’ve entirely flipped the narrative, making him the person who attacked “an old, caucasian lady”––a narrative that can be fatal for Black men.

The woman was cited for misdemeanor child abuse but was not jailed because of coronavirus concerns, according to NBC Bay Area.

Many people on social media expressed their anger at the incident.

Some pointed out the irony of her getting closer to him while asking him to stay away. She wasn’t wearing a mask in the incident.

“Karen’s are so privileged that they will look right in the camera and say shit like… get off of me,” commented one person. “Not (sic) giving a damn that the camera can see there is nobody on them.”