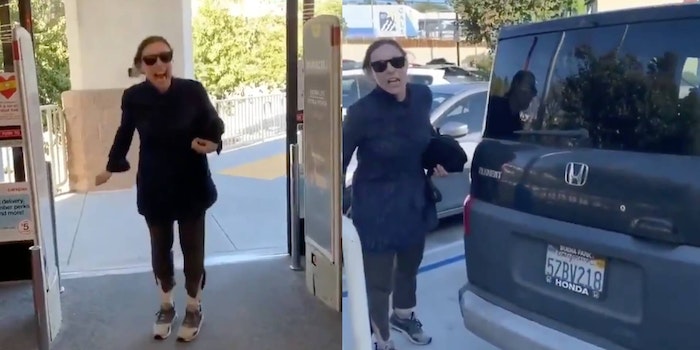 A chilling video that went viral on Wednesday shows a white woman outside of a CVS repeatedly screaming the N-word and saying she would kill all Black people if it wasn’t against the law.

WHO IS SHE?! SHE NEEDS TO BE IN PRISON FOR LIFE! pic.twitter.com/iiShKgmkPL

The video of the incident had over 17,000 replies on Thursday. Commenters have speculated about the woman’s identity and mental health.

A Twitter user who said she was at the scene, Reneé Saldaña, wrote on Twitter that it took place at CVS in Eagle Rock, California. Saldaña said there was “no build-up” or “prior altercation” before the incident.

No, not as far as I could tell. It was quiet in CVS & then someone just yelled the n-word and then it was quiet again & then that woman started screeching racist stuff towards a Black woman (who shot that video). There was no build-up or prior altercation.

The 42-second long video starts with the woman jumping and screaming, “I hate [N-word]!”

“Yea she’s on drugs or something,” says the person filming as the woman walks out of the store.

“It’s OK. We’re calling the cops on you because you’re disturbing everyone in there,” says a person behind the camera.

In a statement to the Daily Dot, CVS said the company is “committed to maintaining a welcoming and diverse environment in our stores to help ensure that all customers are treated with respect and dignity.”

“We condemn, in the strongest terms, the behavior of the customer seen in the recent social media video,” CVS’ statement said. “She was directed to leave the store by our employees and we will cooperate with any police investigation regarding this incident.”

News website Heavy.com identified the woman as 49-year-old Heather Lynn Patton. A man claiming to be her neighbor said she has a history of such behavior and has made “violent threats” to him and his family, according to KTLA.

Los Angeles County court records show that two restraining orders were issued against Heather Patton in 2017, and one was in 2016.

On Twitter, many questioned whether the video proved the woman is mentally ill. But, as some noted, dismissing racism because someone is mentally ill does not excuse the behavior and insinuates that racism is linked to mental illness (it’s not). Similar conversations arose earlier this year when a man who called cops on Black women at a swimming pool attributed his racism to autism.

For those using mental illness to justify this

(If you don't know a muslim or have a friend that is, u do now. follow)

Commenters also worried that the license plate seen in the video might lead to harassment of the wrong person. Multiple users on Facebook with the name Heather Patton have been accused of being the woman in the video.

Let's not. We have no idea if the vehicle is hers or belongs to someone else. And we don't have all the facts, such as what prompted her asinine outburst.

Her words are vile but she has the right to express them. If peeps feel it qualifies as hate speech, report it.

What some found most chilling about the video was the woman’s unapologetic attitude, which was attributed to the climate under the current administration.

I would have suggested that but I know that there will be black employees there.

WE need to do something about these people, it should be against the law I think it should be something like verbal racist assault. And public shame them by making their crimes public like a sexual assault data base. Put them in prison this is not okay.

What is wrong with people? I've lived in the South my whole life & Trump has completely unleashed the KKK Neo-Nazis & other white nationalists. I haven't seen them THIS brazen in a very very long time. They no longer seem to fear backlash from the community. It's terrifying!

She wouldn't dare to do this in public before Trump was elected.

According to Heavy.com, Patton is a costume designer in Hollywood, and her IMDb profile says she’s worked on shows and movies including Medium, Paterson, and Private Practice. Actor and social justice advocate Patricia Arquette, who played Allison DuBois on Medium, asked for an update on the situation on Twitter on Thursday morning.

Can someone update us about this?

Update 6:06pm CT, Sept. 26: Reneé Saldaña, who said she was shopping at the California CVS store and witnessed the incident, told the Daily Dot that when the woman started shouting, “it seemed so random and out of nowhere.”

“People slowly started walking out aisles and it was so confusing because it was unclear who she was shouting at or what prompted it,” Saldaña said. “I felt unsafe once I realized what she was yelling and when she began wandering around the store.”

Saldaña also said that she didn’t see any customers or CVS employees intervene, contradicting CVS’ statement that the shouting woman was “directed to leave the store” by employees.

Saldaña said that after leaving the store, the woman got in the Honda Element seen in the video and sped off “the wrong way” down the street.