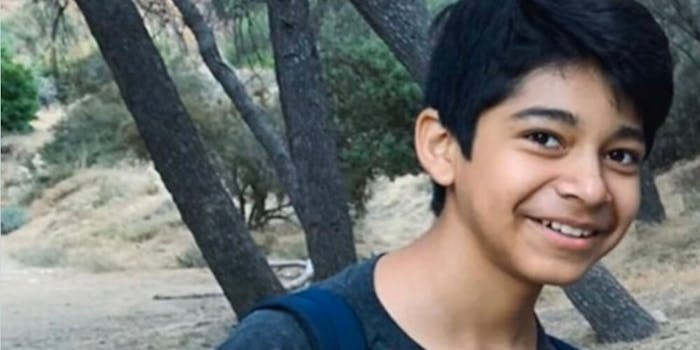 Students and parents are worried about escalating violence at the school.

A young teen has died a week after he was violently attacked by two classmates in an incident that was filmed and shared to social media.

The incident occurred Sept. 16 outside of the main building at Landmark Middle School in Moreno Valley, California. A video of the attack was shared online last week, and the 13-year-old, identified by officials as Diego, died on Thursday.

In the video, a student in a black t-shirt appears ready to fight, while Diego appears to be trying to de-escalate. When Diego turns away, the first student punches him in the jaw, and a second unseen attacker hits him in the head from behind. As Diego fell toward the ground, his head smashed into a concrete pillar, and the first assailant punched him in the head one more time before running away.

TooFab reports the middle schoolers who witnessed the attack said Diego was left on the ground, foaming at the mouth, and may have had a seizure. After responders performed CPR, Diego was rushed to the hospital where he remained in critical condition for nine days.

On Wednesday, the Riverside County Sheriff’s Department shared in a public statement that Diego died after “rigorous medical intervention and treatment efforts at an area hospital were unsuccessful.”

According to CBS Los Angeles, two students were arrested on the day of the incident and brought to Riverside County Juvenile Hall on a charge of assault likely to produce great bodily injury. The students were still in custody on Wednesday.

Diego’s family, according to the sheriff’s department statement, is preparing for organ donation.

Parents and students have been urging district officials to do something about escalating violence. At a vigil held for Diego on Wednesday, families confronted theMoreno Valley Unified School District superintendent.

“You knew this was going on at school, and you did nothing,” one member of the crowd yelled at district officials, according to a video shared to Twitter.

Angry crowd confronts @MorenoValleyUSD superintendent as he enters #LandmarkMiddleschool during vigil for 13 yo student Diego who just died more than a week after an attack on campus involving 2 other students. #morenovalley @abc7 11pm #abc7eyewitness pic.twitter.com/UH35D0RT7Q

Last spring, 19 students at the school were reportedly treated for pepper spray exposure after guards sprayed a group fight to break it up.

Editors’ note: The headline of this article has been updated.