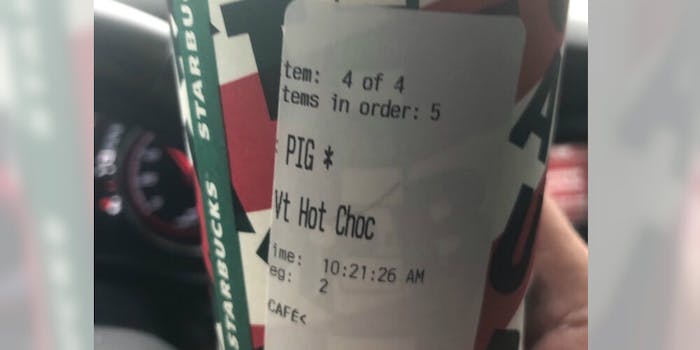 A Starbucks employee was fired for writing 'PIG' on an officer's cup.

An Oklahoma Starbucks fired an employee for allegedly writing “PIG” on a police officer’s cup.

In a since-removed Facebook post, Kiefer Police Chief Johnny O’Mara said an on-duty officer wanted to get dispatchers coffees to thank them for working on Thanksgiving.

“This is what he gets for being nice,” O’Mara wrote. “What irks me is the absolute and total disrespect for a police officer who, instead of being home with family and enjoying a meal and a football game, is patrolling his little town.”

O’Mara included a photo of one of the five orders in question. In the photo, a venti hot chocolate cup reads “PIG” where the name of the ordering individual typically goes. All the cups allegedly have the same “PIG” label.

Kiefer Police Chief Johnny O’Mara says one of his officers picked up five cups of coffee today at the Glenpool @Starbucks for his dispatchers, as a thank you for working on Thanksgiving.

“PIG” was printed on all five labels, he says. @NewsOn6 pic.twitter.com/tmEwid8JRc

Starbucks has since apologized in a statement and confirmed with the Daily Dot the employee in question was fired.

“This is absolutely unacceptable, and we are deeply sorry to the law enforcement officer who experienced this,” the company wrote in its statement. “The Starbucks partner who wrote this offensive word on a cup used poor judgement and is no longer a partner after this violation of company policy.”

Local reporter Amy Slanchik wrote that O’Mara told her the Starbucks employee who made the “PIG” labels called the officer to apologize.

“(O’Mara) tells me she apologized, and said it was meant to be a joke between her and another co-worker,” Slanchik tweeted.

.@Starbucks corporate headquarters just called me. An employee in the communications department informed me the employee in question in this incident has been suspended. @NewsOn6

O’Mara’s alleged daughter took the opportunity to speak out against her father, who she says she hasn’t spoken to in years.

She wrote in a now-viral tweet that her father was a “pig,” before thanking “the brave men and women from Starbucks for their service.”

“For the record, my father has 0 business being a police officer. he was blatantly, proudly racist when i was a kid. said things i would never repeat. he treats women like dogs, including his own daughter. oink oink,” she wrote.

for the record, my father has 0 business being a police officer. he was blatantly, proudly racist when i was a kid. said things i would never repeat. he treats women like dogs, including his own daughter. oink oink 🐖

ya the deputy it actually happened to told my mom he didn’t really care and that it was a harmless joke, no big deal. but my father is a camera whore who couldn’t resist the attention

She further said that the officer who bought the coffee “didn’t really care and that it was a harmless joke.”

“But my father is a camera whore who couldn’t resist the attention,” she wrote.