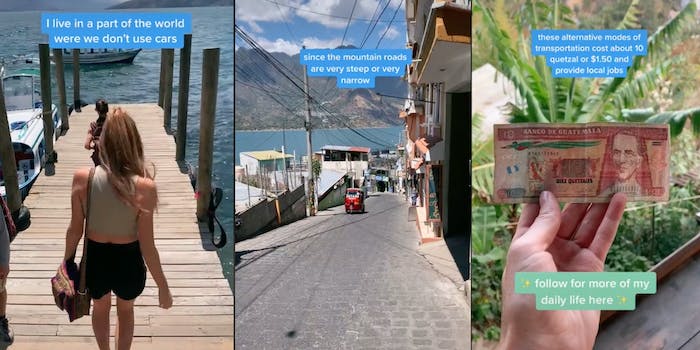 A white TikToker is receiving backlash for posting videos of her “conscious life” as an event coordinator in a Guatemalan retreat center. Some commenters are calling her a modern-day Christopher Columbus.

Michelle Rusk, who works at a “co-creation community” in Guatemala, posts videos of the island’s sustainability measures and provides informational videos regarding food and her lifestyle on the island.

In a March 13 video, Rusk says, “I live in a part of the world where we don’t use cars” and takes viewers on a tour of the Guatemalan island where she lives.

“Instead, we live on a huge lake where boats are the main form of transportation,” she says. “We use them to go to the surrounding towns to shop or run errands.”

But a viral tweet led to a flood of criticism about Rusk’s unintentional portrayal of the retreat center as a permanent vacation—for white people. In a tweet with 8.2 million views, user @200mgedible shared Rusk’s March 13 video and wrote, “They really said ‘no guatemalans, just vibes.'”

Commenters called Rusk a “colonist” and some asked why she isn’t living in the U.S. mountains. One user said that she pronounced “tuk tuks” incorrectly.

In referencing another one of Rusk’s videos, a commenter said, “‘How many different cultural activities can we steal, do badly, and fit into one video?'” Another commenter called Rusk’s videos “vile colonial tourism.”

Rusk, who did not immediately respond to the Daily Dot’s request for comment, turned off her Instagram comments. Her work is part of an organization called Tribal Village, which is a self-described “gathering of conscious and passionate co-creators.”

“We are the Children of the New Earth, and we claim our right to live together in a sacred, beautiful and harmonious nature,” the organization’s site states. “Weaving an intentional & international community.”

Tribal Village did not immediately respond to the Daily Dot’s request for comment.

Although many comments criticized Rusk, one commenter asked “why people are so mad in the comments.” One individual tweeted that the people at the retreat center have respect for the local communities.

“I can say from having been there that the people at the retreat center (visitors & owners) did have respect for the locals,” they wrote. “They are all employed to work there. The critical angle people have here is appropriate to the broader context, but condemning individuals misses the point.”

Still, the criticism continued. One Twitter commenter called out Rusk for calling Guatemalans “Guatamalians.” Others are calling her and her co-workers a “cult.”