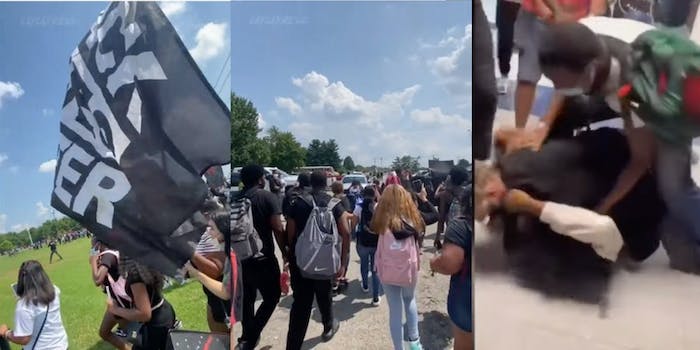 The teacher reportedly told the student, "You're just gonna be another Black boy shot."

Students at Marion C. Moore School in Louisville, Kentucky walked out of school to protest after a white teacher was involved in a physical altercation with a Black student on Monday.

The original video appears to have been an Instagram Story, and therefore is no longer available. However, local news outlets have aired clips of the fight, which show the teacher, William Bennett grabbing the student by his hair and laying on top of him.

Jefferson County Public Schools spokesperson Renee Murphy told TV station WHAS11 that “some kind of physical altercation” took place between a student and teacher in the hallway of the school.

Bennett has since been reassigned to “non-instructional duties pending the outcome of the investigation,” Wave 3 News reported.

The student told WDRB that he initiated the fight but that the teacher went “overboard.” The student, who is a gunshot survivor, said that he was triggered after the teacher reportedly told him, “You’re just gonna be another Black boy shot. I’m gonna put it in English. He said, ‘you’re just gonna end up in the streets dead.'”

Layla claims that Bennett used racial slurs and wouldn’t get off the student when other students tried to pull him off. She says Bennett grabbed the student’s hair and kneed him before he was finally pulled off.

“There is in [sic] no circumstance where a teacher puts their hands on a minor and says racial things!!!” part of her caption reads. She also called for her school district to “do better.”

Students and parents protested outside the school after footage of the altercation went viral. Several of the protesters held signs that said “Black kids matter” and “protect our kids.” They called for the teacher to be fired.

The student was charged with assault and suspended for at least 10 days. He and his mother told WDRB they are looking for a lawyer.

Jefferson County Public Schools did not respond to the Daily Dot’s request for comment via email.