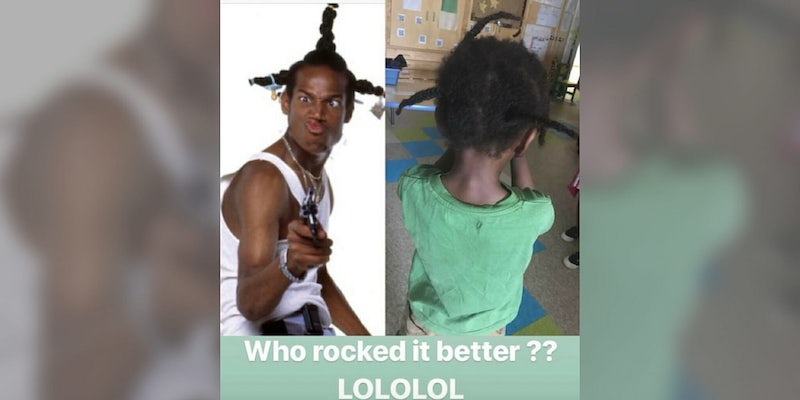 The school is launching an investigation.

A school district board in Canada is investigating an incident involving a white substitute teacher who posted the image of a Black child on her Instagram stories, mocking the child’s hair by comparing it to that of a purposely goofy, stereotyped Black movie character.

Last week, Twitter user @giaper brought the offending post to Peele District School Board’s attention by sharing the image on the social media platform. The post, now deleted from the substitute teacher’s account, compared a Black student’s hair in plaits to that of Marlon Wayan’s character Loc Dog in the 1996 parody Don’t Be a Menace to South Central While Drinking Your Juice in the Hood. The image is captioned, “Who rocked it better?? LOLOLOL.”

“Hi @PeelSchools, please be informed that a grade school teacher with your district is 1) openly mocking her students’ appearance and posting photos of them on social media 2) tagging the location of the school on her Instagram, putting them in danger,” the Twitter user wrote.

Hi @PeelSchools, please be informed that a grade school teacher with your district is 1) openly mocking her students’ appearance and posting photos of them on social media 2) tagging the location of the school on her Instagram, putting them in danger. pic.twitter.com/Y3JNwz8EIf

In a following Tweet, the user berated the substitute teacher’s behavior, calling it embarrassing and racist.

“This is not the kind of behaviour I expect from educators. This is so embarrassing and honestly fully racist,” the person wrote. “There are dozens, if not hundreds, of qualified teachers who are waiting for teaching positions, and this is who our children learn from?”

I can confirm this is under investigation by the superintendent of the school and being addressed swiftly. We thank @giaper for bringing it to our attention.

“I can assure you it’s being investigated as anti-Black racism and being taken seriously,” another board tweet assured.

I can assure you it’s being investigated as anti-Black racism and being taken seriously.

According to Toronto’s City News, the substitute teacher has been banned from speaking with students or teachers, and the school’s superintendent of education launched an investigation on Saturday. The teacher reportedly often taught kindergarten and has now been prevented from taking shifts with the district and communicating with students or staff.

Carla Pereira, spokesperson for the board, said the behavior by the teacher is “simply unacceptable,” and that they’re unsure how long the investigation will take. The board’s social media guidelines for teachers could penalize offending social media posts with a verbal reprimand, attending sensitivity training, or termination.

The teacher has not been identified, while the Instagram account for the username that posted the offending image no longer exists.

“You’d be hard-pressed to look at that particular image and say that it’s not a post that would be considered racism,” Pereira said. “You look at it, you look at the use of Black stereotypes and you look at how the child is being compared to another individual in not a very nice way. I think you’d be very hard-pressed to say that it’s not anti-Black racism—even though that’s what we’re hearing from some members of the community who are saying its just a joke, it’s really not racist.”