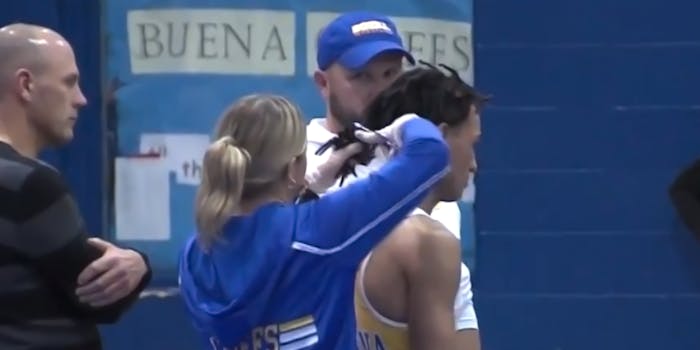 The look on the student's face says it all.

In a stomach-churning video, a white referee at a New Jersey high school is seen forcing a Black student wrestler into having his dreadlocks chopped off.

The student, Andrew Johnson, was about to compete in a wrestling match for Buena Regional High School in New Jersey when the referee gave him an ultimatum to either cut his dreadlocks or accept defeat. While Johnson “chose” to have his dreadlocks cut, he is almost in a state of shock as it’s happening. In the video, he stands, nearly helpless, as a white woman cuts off his hair. Johnson won the match but was visibly still upset afterward.

The referee, who has been identified as Alan Maloney by TMZ, said the cover Johnson was wearing over his dreadlocks wasn’t enough. He also has a history of racism. In March 2016, he used a racist slur against a Black man at a social gathering, for which he later apologized.

Mike Frankel, Sports Director at SNJ Today News, tweeted out the video of Maloney’s action insinuating it was an act of heroism on Johnson’s part, calling him the “epitome of a team player.”

Epitome of a team player ⬇️

A referee wouldn't allow Andrew Johnson of Buena @brhschiefs to wrestle with a cover over his dreadlocks. It was either an impromptu haircut, or a forfeit. Johnson chose the haircut, then won by sudden victory in OT to help spark Buena to a win. pic.twitter.com/f6JidKNKoI

He clearly missed the entire point—that Johnson was forced, on the spot, to choose between having white authority strip him of his identity and culture or being “team player”—and his romanticizing of the incident caught flak on Twitter.

More context for you. Racial breakdown of Buena NJ (where Buena Regional HS is): 77 percent white. 7 percent black. This data will mean nothing to lots of you. But some will get it. https://t.co/dD8nn4YSiq

All involved need be sued and arrested for assault.

This is disgusting. You all watched adults force a child to choose between part of his identity and the sport he loves & praised his acquiescence to that humiliating choice as “good sportsmanship.” Appalling doesn’t even begin to describe this whole situation or your sick praise.

this is not a feel-good story this is an athlete being humiliated before a match because his Blackness was penalized.

The Buena Regional High School did not respond to the Daily Dot’s requests for comment. Its website cites their mission as “Honoring Tradition. Inspiring Future.”