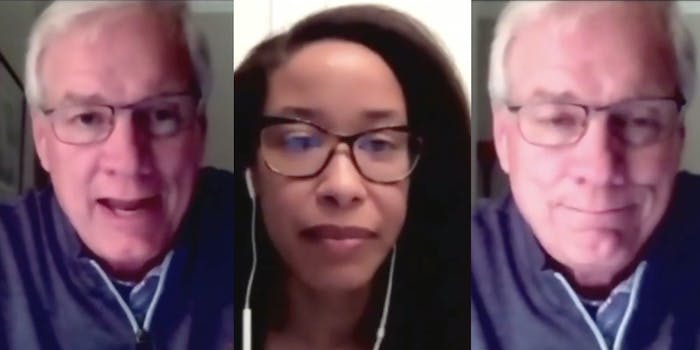 'Please, sir, call me as I would like to be called."

A white North Carolina zoning commissioner was fired after repeatedly refusing to refer to a Black woman by her appropriate title during a meeting.

The incident occurred via Zoom last Monday, during a public meeting addressing a development project near the home of Dr. Carrie Rosario, an associate professor at the University of North Carolina-Greensboro with a doctorate in public health. A nearly two-minute clip from the end of the four-hour meeting was shared to Reddit, where it quickly rose to the top of the r/PublicFreakout forum. It has since collected nearly 30,000 upvotes 4,000 comments.

The video begins with Rosario sharing her concerns about how the development might affect the quality of drinking water for nearby residents. When the discussion is kicked back to now-former Greensboro zoning commissioner Tony Collins, he shifts the conversation away from Rosario’s safety concerns by refusing to refer to her as “Dr. Rosario.”

Near the end of the meeting, Collins, who is also a partner at Collins & Galyon General Contractors, refers to Rosario as “Mrs. Rosario” despite her earlier request that she be addressed as “Dr. Rosario.”

Rosario quickly corrects Collins after he begins speaking, telling him, “It’s Dr. Rosario, thank you, sir.” Collins appears to ignore the correction, repeating “Mrs. Rosario” and forcing her to correct him a second time.

Rosario again vocalizes her request to be called “Dr. Rosario” and tells Collins, “I would call you Tony, so please, sir, call me as I would like to be called.”

“I am verbalizing my name is Dr. Carrie Rosario, and it really speaks very negatively of you as a commissioner to be disrespectful,” she says.

Collins maintains that he’s “not trying to be disrespectful” as he continues to not address Rosario by her doctor title.

Last Tuesday, the Greensboro City Council played a clip of the contentious discussion. The council then voted unanimously to remove Collins from his position as zoning commissioner. He was initially under term until 2023.

The Black councilwoman who initiated the vote, Sharon Hightower, called the exchange between Collins and Rosario “very disrespectful.”

Rosario told the Charlotte Observer that she was “hurt, upset, angry” over the treatment she received from Collins. “I tried to give him the benefit of the doubt at first and corrected him, but as the exchange unfolded it was clear that he was intent on disrespecting me,” she added.

Following his dismissal from his position as zoning commissioner, Collins reportedly reached out and apologized to Rosario. He also accepted his removal in a formal apology letter addressed to the Greensboro City Council, the Rhino Times reports.

“I agree with you that my exchange with Dr. Rosario was out of line and accept your judgment to remove me from the commission,” Collins wrote. “There is no good excuse for my interaction with Dr. Rosario so I will not try to offer one. Citizens deserve better. I would never want to bring any harm to the City of Greensboro or to any of our citizens. I failed to live up to my own standards and to yours. I regret that sincerely.”

Redditors who watched the exchange were shocked by Collins’ refusal to be respectful. As one viewer noted, it would have been easy to say, “I’m sorry, Dr. Rosario,” and move on.

Others mocked the disgraced ex-commissioner for choosing such a “stupid hill” to die on.