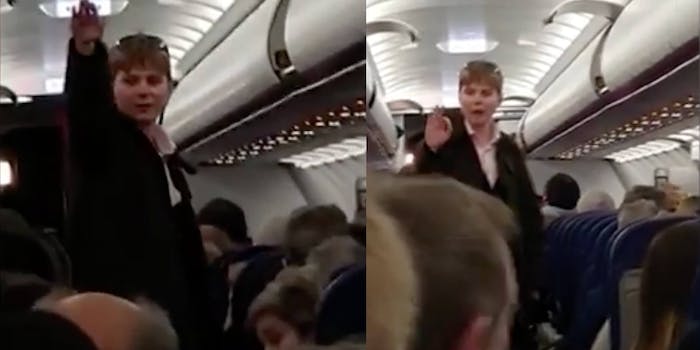 He kept repeating the Nazi salute as security entered the plane to escort him out.

A white man has been caught on camera repeatedly making the Nazi salute and white power symbol on a flight in Liverpool, United Kingdom, before being escorted out of the flight.

He also made racist comments during the ordeal, according to the Daily Mail, which reported that the Wizz Air flight had just landed from Warsaw, Poland. The man, who is reportedly British, was drunk on the flight and had been harassing and disturbing others on board.

The video begins with the 27-year-old standing amid a sea of seated passengers, and others seem to be recording him as well. He is seen making the Nazi salute repeatedly while ranting in a different language.

Much of his words, as shared by the Daily Mail, were inaudible, but he used the N-word at least in one instance. He is also seen making the “white power” hand gesture in numerous instances.

“Your job is to be a n****r,” he says pointing to one man a few seats ahead of where the camera is recording.

“We will always be better,” he says at some point, in addition to other things which, though are not audible, garner gasps from the other passengers.

He also reportedly used the word “Untermensch” which means “subhuman” and was used as a key message in Nazi propaganda.

The Daily Mail reported him using the term “Sieg Heil,” which was often used alongside the Nazi salute by Nazis.

When another white man, from a few seats ahead of him, tried to confront him, he responded with seemingly similar harsh words, judging from the other passengers’ gasps that followed.

He kept repeating the Nazi salute as security entered the plane to escort him out.

The attacker has not been identified, but was arrested, according to the Daily Mail, for “on suspicion of racial/religiously aggravated harassment and entering an aircraft when drunk/being drunk in an aircraft.”

He has since been released but remains under investigation.