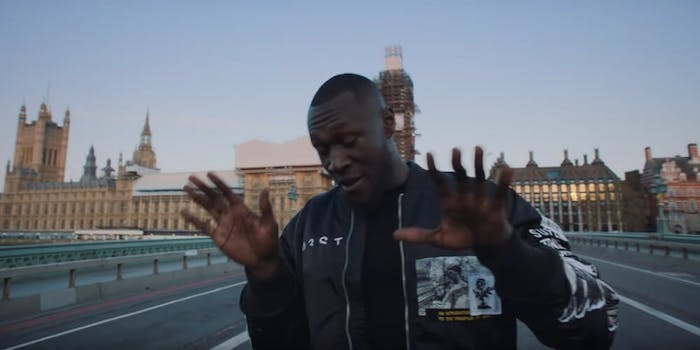 People are praising Stormzy for calling out racism in the U.K.

Stormzy is making waves, and it's not about music.

British rapper, singer and songwriter Stormzy is making waves with his latest statement on racism in the U.K. and Prime Minister Boris Johnson. In an interview with Italian newspaper La Repubblica, Stormzy said Britain is “100%” racist, even if it is kept on the down-low.

“There’s a lot of racism in the country,” Stormzy told La Repubblica. “Trying to explain that Britain is a racist country [to a British person] is the most difficult thing ever. They think: ‘No, it’s not. Stormzy, you’re successful. Look at London. There’s loads of black people.’ It’s a more difficult case to fight.”

The Guardian reports that he pointed to the prime minister, who Stormzy said, “made it more acceptable to say racist things in British society.”

Responses to Stormzy’s comments have been equally positive and negative.

Online, the artist has received praise for his outspokenness, but the Guardian reports that British television personality Piers Morgan has criticized the statements on Good Morning Britain saying that Stormzy, “shouldn’t have done this and shouldn’t have been allowed to do this.”

However, the Independent reports that the rapper isn’t pleased with the way his interview is being represented by news outlets. Stormzy tweeted on Sunday in response to recent headlines.

“All you publications and media outlets that are intentionally spinning my words for some click bait can suck my dick and please don’t try beg it in the future,” he wrote.