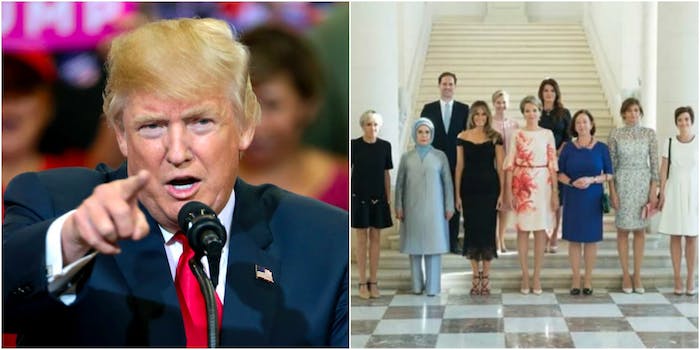 Photo via Gage Skidmore/Flickr Photo via the White House?twitter

You can't be an ally and continually ignore the people right in front of you.

On Saturday, the White House posted a photo on Facebook featuring Gauthier Destenay, the first gentleman of Luxembourg, standing with the spouses of other world leaders—including the first lady of France, Brigitte Trogneux, and Queen Matilde of Belgium. But Destenay, who is married to openly gay Prime Minister Xavier Bettel, was curiously omitted from the photo’s caption. Instead, First Lady Melania Trump’s name was listed twice.

What a bunch of jerks. 👎 pic.twitter.com/cwaF0DLsON

Bettel married Destenay in 2015, making him the second head of state to be in a same-sex relationship, and Destenay’s exclusion quickly generated backlash on Facebook, with organizations like GLAAD calling on the White House to correct the caption. The error was corrected nine hours later.

This might seem like a fairly innocuous mistake from a presidency that generates gaffes with such regularity that the Atlantic devoted an entire column to them. Trump had to have European Union trade policy explained to him 11 times during a meeting with Angela Merkel, so is it any wonder that the White House would omit a European leader’s spouse?

But for LGBTQ people, a seemingly unintentional oversight is a fitting symbol of a presidency that has claimed to be an ally to the community while appearing to erase queer lives at every possible moment. A picture says a thousand words, as goes the old cliché, but it’s what the president won’t say that’s the problem.

Since taking office in January, Trump has consistently rolled back LGBTQ rights at the federal level, including revoking Obama guidelines that allow trans students to be treated in a manner consistent with their gender identity. Just last week, Education Secretary Betsy DeVos claimed that the federal government believes it’s OK if schools discriminate against LGBTQ youth. It’s not the White House’s job to prevent students from being harmed by local administrators, she told a House Appropriations subcommittee on Wednesday.

“For states who have programs that allow for parents to make choices, they set up the rules around that,” DeVos claimed.

But one of the most pernicious and persistent tactics taken by the Trump administration is the revoking LGBTQ people from federal data collection, which advocacy groups have argued amounts to erasing queer and transgender people from public life. The Department of Housing and Urban Development (HUD) quietly rescinded plans made by the Obama administration last year to collect data on LGBTQ homelessness. Although recent statistics from Gallup found that 7.3 percent of millennials identify as LGBTQ, UCLA’s Williams Institute estimates that 40 percent of homeless youth identify as queer or trans.

Shortly after that decision was made, HUD revoked guidelines stating that shelters that receive federal funding must “post information about LGBTQ people’s rights to access shelter safely and in accordance with their gender identity.”

While LGBTQ seniors were removed from two federal surveys—information that was used to provide services to a population that faces high rates of poverty and isolation—what received more attention was the Census Bureau’s decision not to include questions related to gender identity and sexual orientation in the 2020 survey. A leaked draft suggested that data on these subjects would be collected for the first time, but these categories were included in error, Bureau President John Thompson said in a statement. Although advocacy groups claimed that this was an attack on the LGBTQ community, leading experts on data collection claimed that these subjects likely were never under serious consideration.

It’s difficult to argue with that assertion lacking clear evidence, but Sen. Kamala Harris (D-Calif.) noted that the Justice Department dropped its request that questions on LGBTQ identity be included in the Census after Attorney General Jeff Sessions was appointed to lead the department in January. This was just weeks prior to the bureau gaffe.

With each new controversy, the White House reminds the LGBTQ community that Trump has claimed to be a supporter of equality for queer and trans people. When an executive order leaked to the Nation suggested that the president would allow for broad discrimination against LGBTQ folks in the name of faith, the White House press office claimed that the president “continues to be respectful and supportive of LGBTQ rights, just as he was throughout the election.”

“President Donald J. Trump is determined to protect the rights of all Americans, including the LGBTQ community,” the administration said in a statement.

Trump has also referred to same-sex marriage as “settled law,” suggesting that he would not work to repeal the Supreme Court’s 2015 decision on Obergefell v. Hodges as president. But the controversy over Luxembourg’s first gentleman shows that the White House is either clueless, extremely negligent, or has continued to covertly target the LGBTQ community, even despite its alleged allyship. Given that Trump’s recently released budget proposal for 2018 would devastate queer and trans lives by making severe cuts to Medicaid and HIV/AIDS prevention, the answer is likely all of the above.

With Donald Trump, that always seems to be the answer.