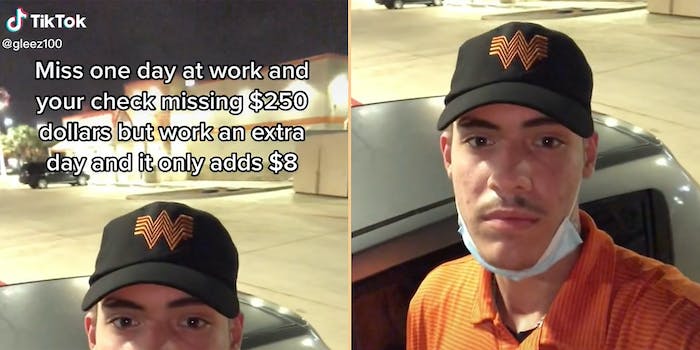 ‘They be so quick to discipline’: Whataburger worker says he was docked $250 from his paycheck after missing 1 day of work

He says he only made $8 for working an extra day.

A viral TikTok video shows a Whataburger employee commenting on how employees can be punished for missing a day of work. He said working an extra day did not make up for the time off. Instead, he claims missing a day of work cost him $250 from his paycheck. The video details one of many ongoing issues within the service industry.

@gleez100 posted a brief video last week that has since been viewed 349,000 times. He’s standing in front of a Whataburger, still in uniform.

The overlay reads, “Miss one day at work and your check missing $250 but work an extra day and it only adds $8.”

“It’s like grades at school; miss one thing, it drops like 20 points, turn something in, it goes up 4,” explained one commenter.

Another believed, without naming Whataburger specifically, “They be so quick to discipline but not rewarding.”

Another commenter expressed his own need for a job, and @gleez100 replied, “everywhere’s hiring gang; you got this. everywhere be understaffed.”

There is truth in his statements, as it is well-known that service industry positions are available in many markets. The core issue is that potential employees can no longer settle for stressful, sometimes hostile work environments without livable wages and benefits. Waves of employee burnout in and outside the service field has also become an increasingly worrisome issue, starting well before to the pandemic, despite what some employers are saying.

In a May 2021 survey by One Fair Wage about pandemic working conditions in the service industry, 76% of the study’s respondents admitted they were considering leaving their jobs “due to low wages and tips.” Meanwhile, 78% said a better paycheck showing “a full, stable, livable wage” would make them consider remaining at their positions.

The Daily Dot has reached out to the TikToker and Whataburger for comment.