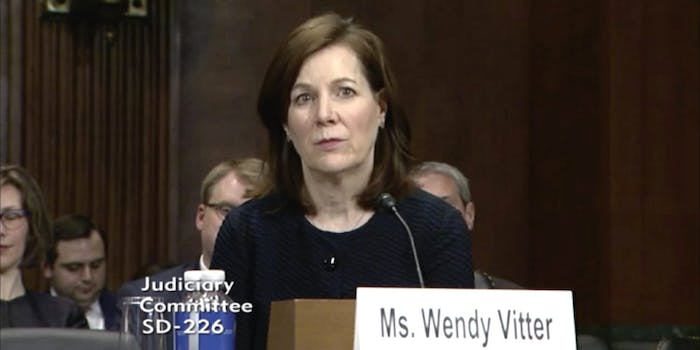 Committee on the Judiciary

Wendy Vitter failed to disclose 95 pages of documents relating to her anti-abortion advocacy.

Wendy Vitter, President Donald Trump’s nominee for a Louisiana district court, told the Senate Judiciary Committee on Wednesday that she would be bound to follow Supreme Court precedent, including Roe v. Wade, if confirmed as a federal judge.

However, Vitter, a lawyer and former general counsel of the Roman Catholic Archdiocese of New Orleans, parsed her answers when challenged by senators on her anti-abortion history. Vitter also wouldn’t directly say if she believed that Planned Parenthood kills 150,000 “females” a year, a claim she previously made at a May 2013 rally when speaking against the opening of a clinic in New Orleans.

Several senators, including Utah Sen. Mike Lee and Minnesota Sen. Amy Klobuchar, pressed Vitter, as well as other nominees, about making judicial decisions that conflict with their personal beliefs. In Vitter’s case, senators spoke regarding her history of anti-abortion advocacy.

After following on her commitment to ask all court nominees about their previous sexual harassment histories, Hawaii Sen. Mazie Hirono, and later California Sen. Kamala Harris, asked Vitter about her failure to previously disclose 95 pages of documents to the committee relating to her anti-abortion history.

Some of these documents related to a Louisiana Right To Life panel titled “Abortion Hurts Women’s Health” at which Vitter, a moderator, commended Texas’ legislative anti-abortion efforts. Vitter also encouraged attendees to take brochures containing debunked anti-abortion claims to their doctors, “and say, ‘Have you thought about putting these facts or this brochure in your waiting room?’ Each one of you can be the pro-life advocate to take that next step. That’s what you do with it.” The brochures, promoted by panelist Angela Lanfranchi and brought to light by Vice, argued that contraceptives cause cancer and that women who take birth control are more likely to be assaulted or murdered.

In addressing Hirono’s critiques, Vitter said she had never before heard claims that abortions cause cancer. Vitter then attempted to rewrite her call to action for Right to Life panel attendees to be a “pro-life advocate” by stating that she was actually encouraging attendees take Lanfranchi’s claims to their own doctors for verification. Hirono challenged Vitter’s pushback, stating that judges should use common sense, and asked if those claims made sense to her. Vitter said they did not.

Hirono, and later Connecticut Sen. Richard Blumenthal, went on to address Vitter’s failure to also disclose her previous accusation that Planned Parenthood kills 150,000 “females” a year. Vitter agreed with Hirono’s characterization that by “females” she had referred to aborted fetuses. But later, when questioned by Blumenthal, Vitter would not say whether she believed that the reproductive healthcare clinic does kill 150,000 “females” annually.

“I’m asking you, very simply. You said that Planned Parenthood kills 150,00o females, 150,000 people, a year. Do you stand by that statement? It’s a yes or no…” Blumenthal pressed Vitter.

“Senator, again, my pro-life stance has been very clear…and that I would set aside any religious views, or any personal views, if I were to be confirmed,” Vitter replied, not answering the question.

Vitter, pressed by Hirono to explain why she did not include those documents in her judicial submission, pointed to the anti-abortion awards and articles she did include with her original submission, but immediately took steps to bring that additional information forward once it was brought to light.

Vitter has been openly denounced by Planned Parenthood and NARAL Pro-Choice America for her anti-abortion history, with both organizations using the hashtag #UnfitToJudge to denounce Vitter’s nomination on social media.

.@KamalaHarris points out Trump has said he would appoint "pro-life" judges who would overturn #RoevWade – and ties it back to Vitter's extreme and dangerous record. Vitter has demonstrated that she cannot be a fair minded and unbiased judge. #UnfitToJudge #CourtsMatter pic.twitter.com/vMmM0Ed1ca

“It would not be for me to question a Supreme Court precedent, period,” Vitter told Harris, repeating a stance she took throughout the hearing when questioned if she would make an effort to be a “pro-life” judge and overturn Roe v. Wade as a federal judge.