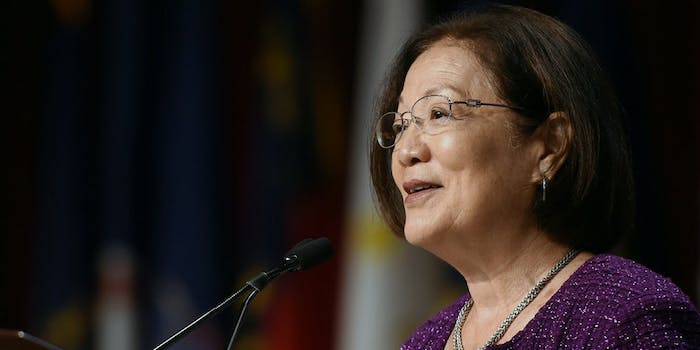 This is how you approach and eradicate sexual harassment.

Enabling the #MeToo movement to flourish into tangible, systemic change has got to start somewhere. For Democratic Hawaii Sen. Mazie Hirono, the buck first stops with her.

At a hearing for Louisiana district judge Kurt Engelhardt, President Donald Trump‘s Fifth Circuit Court of Appeals nominee, Hirono got straight to brass tacks, asking him if he had a history of sexual harassment. It’s a question Hirono has vowed to ask every court nominee, Engelhardt being no exception.

Hirono announced her pledge on Twitter on Wednesday, as part of her responsibility as a member of the Senate Judiciary Committee.

“Starting today, I’m asking nominees to our courts, under oath, whether or not they have a history of sexual assault or harassment. Like in other industries, our judges are in positions of power & #TimesUp,” Hirono wrote in the tweet, including a video of her exchange with Engelhardt.

Starting today, I'm asking nominees to our courts, under oath, whether or not they have a history of sexual assault or harassment. Like in other industries, our judges are in positions of power & #TimesUp. pic.twitter.com/Jk0NcTBi3h

“Since you became a legal adult, have you ever made unwanted requests for sexual favors or committed any verbal or physical harassment or assault of a sexual nature?” Hirono asked the nominee at the hearing. “Have you ever faced discipline or entered into a settlement related to this kind of conduct?”

“No, senator,” Engelhardt responded to both questions.

In addition to sharing her experiences of sexual harassment, Sen. Hirono was also one of the more than nine senators who asked former Minnesota Sen. Al Franken to resign amid several allegations of inappropriate kissing and de jure sexual assault, and has asked the same of Trump, by whom at least 19 women have said they were sexually harassed or assaulted.

“He’s [Trump] a misogynist and admitted sexual predator and a liar,” Hirono said. “The only thing that will stop him from attacking us, because nobody is safe, is his resignation.”