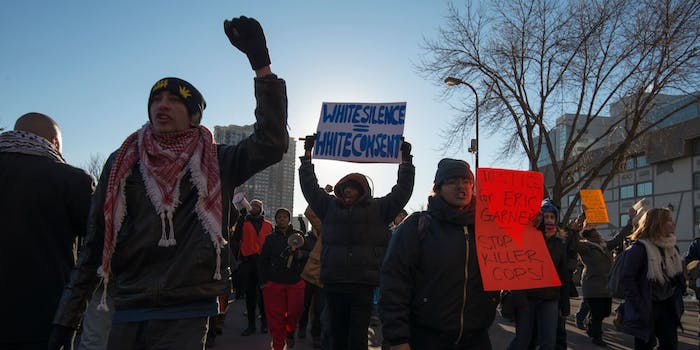 Someone then tried to frame her.

It started with a text message from her client—and ended with a doctored screenshot trying to defame her because of her support for the Black Lives Matter movement.

Shakira Rochelle, who owns Shakira Rochelle Photography,  recently received a text message from a now-former client who refused to go forward with their arrangement because Rochelle does not buy into the trope of “All Lives Matter”—an antidote to the Black Lives Matter movement that erases the challenges and violence faced by the Black community.

Screenshots shared by Twitter user @PINKdot_COM on Tuesday show the message from a client, whose name is blocked out, but is partially-identified as “(Bride)”:

“We have done a lot of talking and we cannot bring ourselves to support anyone who is so outspoken on matters that simply do not concern them as well as someone that does not believe that ALL lives matter,” read a part of the text after the bride said they are “requesting a refund” on the deposit.

“We would be truly embarrassed to have you at our event and feel that you aren’t stable enough to complete the job we need from you,” it continued. “Please let me know when and how we can expect our refund.”

Rochelle responded saying while she was “sorry to hear that,” the deposit in question was non-refundable as per the contract, and added that this deposit amount would go to the Black Lives Matter movement.

“I wish you a life time of growth and I would like to thank you for your donation to Black Lives Matter,” she concluded in the text.

The bride threatened to sue her.

Rochelle’s history shows she’s been a supporter of the movement. On June 5, as the Black Lives Matter movement gained momentum not just across the country, but also around the world, her photography page shared a message expressing solidarity with the movement.

“Shakira Rochelle Photography stands in solidarity with the black community. The black lives matter movement has my endless support,” read the message.

Soon after the tweet went viral, another screenshot reportedly surfaced where Rochelle appeared to say “so now I just upload it to Facebook, and then promote/share it and the BAM. We are back in business baby.”

“Who said corona is going to shut our business down? Exploitation of the BLM movement for the win!!!!” the message continued, insinuating that she did this for clout.

The Chatty Passenger, a blogger on Facebook, put out the screenshots and urged her nearly 23,000 followers to help her determine if it’s accurate.

“Evidently the second photo is altered. There are very subtle differences between the two that you’ll notice if you enlarge them,” she said in an update.

On Wednesday, Rochelle addressed the issue on her own Facebook post, expressing her shock at the way things turned out.

“Today I woke up to something that hurt my soul,”’ she said with reference to the doctored screenshot.

“This is the most incredibly absurd thing I have ever heard. The original post started out private until a friend asked if she could share it. I never had the intentions or the desire to go viral for this or anything else,” she said, adding that she is anyway booked till December and doesn’t have enough availability.

“I have always stood up for human rights and will continue to do so. I have marched with my loved ones as well as alone. My intentions are pure,” she said.

On her Facebook post, Rochelle received tons of support following both her action as well as the clarification by the Chatty Photographer.

“We all know that was a despicable ploy to try and hurt you. The fact you were so hurt by the accusation speaks to your pure heart,” wrote one user.