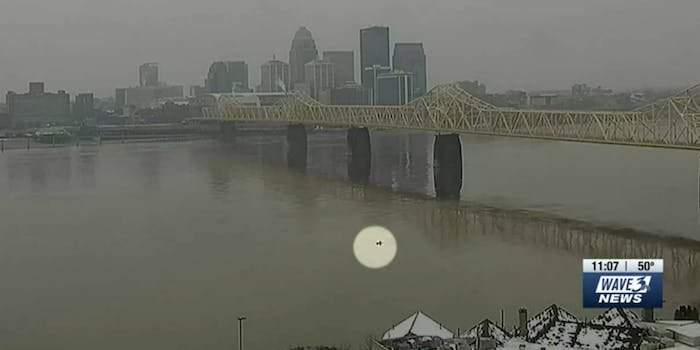 Missing teen was inadvertently captured by weather cam before his disappearance

His kayak was found without him in it.

A teenage kayaker went missing on Sunday, and a weather camera may have captured the moments leading up to his disappearance.

Louisville Metro Police Department and the Indiana Department of Natural Resources are working together to search for 16-year-old Jacob Stover, whose kayak was found without him in it on Sunday, according to WAVE 3 News.

The WAVE 3 News Skytrack Weather Camera captured what is believed to be Stover in the kayak on the Ohio River. The kayak is seen moving in circles and passing under a bridge, into an area that prohibits boats and kayaks, according to alleged signs at the bridge. The teen then exits the frame.

The way the kayak was moving is raising questions, according to WAVE 3 News.

According to Nathan Ginn, an experienced kayaker who spoke with WAVE 3 News, “There’s so many things going against (Stover) in that condition.”

“If you look across the horizon, you see a line in the horizon,” Ginn said. “There’s a drop, a low head dam, circulating dam.”

“Being (alone) and in the most dangerous spot… Cold weather kayaking is one of the most dangerous things you can do and springtime kayaking, when the water is still cold, people can fall in and don’t realize how terrible that experience is going to be for their bodies. It’s oftentimes not survivable,” he added.