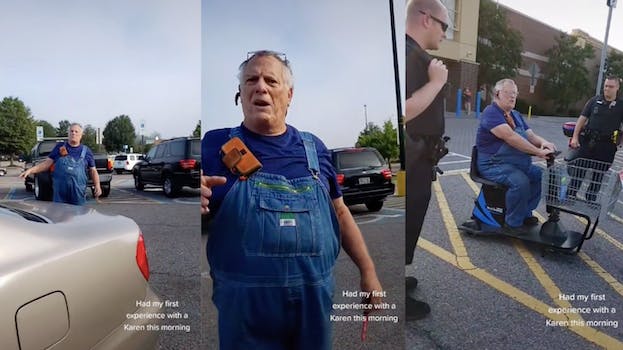 ‘You don’t need to be in that spot’: Male Karen accuses woman of faking disability to get handicap spot

A male Karen was caught on camera harassing a Black TikToker in a Walmart parking lot because she parked in a handicapped spot, and he didn’t believe she had a disability.

The video, which currently has over 647,000 views, features text that reads, “Had my first experience with a Karen this morning.” It starts with the man telling the woman recording the video that just because she has a sticker signaling that she has a disability, “doesn’t mean [she’s] right.” She tells the man to mind his business and points out that he was also able to secure a parking spot, so he had no business worrying about her. The man claims that he is handicap.

“You’re not handicapped,” the man tells the TikToker as he continues to get closer to her. “You don’t need to be in that spot.” The two of them talk over each other until the man eventually decides to call the police.

“Y’all need to learn how to mind y’all’s business,” the TikToker tells the man as he pulls out his phone. “You’re in my business.”

The video then cuts to two police officers talking to the man as he sits in a motorized shopping cart. One of the police officers can be heard confirming that there’s nothing they can do because she’s legally parked. The man backs down immediately. “That’s fine,” he says in a calm tone. “As long as that person is handicapped.”

Her comments section was flooded with other people with disabilities standing in solidarity with her. They explained that not all disabilities are visible and that disability is not a monolith. “I was diagnosed with heart failure at 19,” one person wrote in the comments. “I looked healthy but couldn’t walk 50 [feet] without being winded. I would always get looked at when I parked.”

Another person wrote that they have a friend with multiple sclerosis, “and you would never know on some days. Disability comes in many different ways.”

People also laughed at the man’s swift change in attitude. “He’s all aggressive when she by herself, then the police show up he’s in a wheelchair acting helpless.”

The TikToker could not immediately be reached by the Daily Dot for comment.