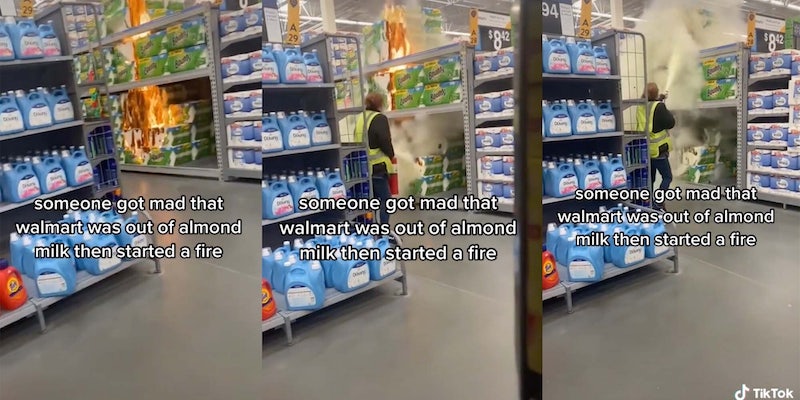 'It's the quicker burner upper.'

Update 8:19am CT, Feb. 3: The user who posted this TikTok, @thriftymuse, tells the Daily Dot that the real reason for the fire at Walmart was because a “young girl” was participating in a TikTok trend that focuses on lighting random items on fire at Walmart. Our original report is below.

In a TikTok posted this week, a large stack of Bounty paper towels on sale at a Walmart are seen on fire. @thriftymuse, who posted the video, said that the towels were set on fire because the Walmart in question “was out of almond milk.”

The 11-second TikTok also shows an employee using a fire extinguisher on the paper towels, and the fire seems to be extinguished by the end of the video.

The video has been viewed 8.5 million times, and is only the latest evidence of items in Walmart being set ablaze: Shelves of piñatas were seen burning in a viral TikTok posted on Jan. 22. A man was arrested for arson after setting fire to household products in a North Carolina Walmart on Dec. 28; and in February of that same year, a man created “$6 million worth of damage” in an Arizona Walmart by setting fire to products.

The comments section of @thifymuse’s video was filled with Walmart jokes.

“They got their only three workers to put it out,” commented @mrsbennett2k18, referencing how Walmart’s are frequently understaffed.

“Nobody thinks it’s suspicious that the one who recorded knows specifically what they where mad about,” wrote @brayn_ca.

“This is exactly what I’d expect people who drink almond milk to do,” commented @cptjacksparrow.

The Daily Dot has reached out to @thrifymuse via Instagram direct message, and Walmart.