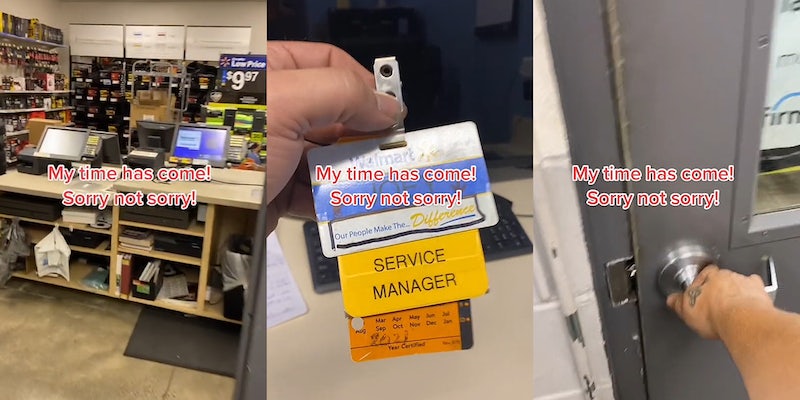 'Sadly they will not care. We are just replaceable numbers.'

A Walmart service manager shared that he quit his job at Walmart after not being able to make a difference at the company.

The TikToker Killa Cure (@iam_rockcity) recorded himself leaving his Walmart name tag in what appears to be his office. In the video, he reads the phrase “Our people make the difference” branded on his nametag.

“I tried,” he says. “You didn’t let me make the difference.”

Then, he sets his nametag down and walks out of the store, yelling “fuck this place” on his way out.

“My time has come! Sorry not sorry!” the video’s on-screen text overlay reads. The TikToker doesn’t share any specific reasoning for why he decided to quit his job at Walmart, but according to his previous videos, the TikToker was vocal and critical of the billion-dollar corporation and the way the company treated its employees. He had also previously gone viral for issuing a public service announcement to customers who were impatient when the AutoCare department was short-staffed. In that video, he claimed “it wasn’t his fault Walmart doesn’t make enough billions to hire somebody for the counter.”

As of Thursday, the TikTok video accumulated about 145,000 views. Some viewers applauded the TikToker for quitting his job.

“Good for you. best thing that I did as well,” another viewer commented.

Multiple others said they recently quit their jobs at Walmart as well. Some said they don’t expect to be missed.

“Leaving Walmart was the best decision I ever made,” one user said.

“Sad thing is they won’t even remember your name next week. I worked for Walmart 7 yrs. people hugged me when I left only to black list me company wide,” another user wrote. In reply to the comment, the TikToker wrote, “By next year the store will have all new associates.”

“Sadly they will not care. We are just replaceable numbers,” one viewer commented.

The TikToker wrote in reply, “I don’t expect them to care. They’ve shown me multiple times.”

“Replaced that afternoon. Walmart keeps on rolling,” another viewer said.

The Daily Dot reached out to the creator via TikTok comment and to Walmart via email.